India was the second-largest producer of tea in the Asia Pacific region after China, and the largest consumer of said beverage, using nearly 30 percent of the world’s tea output. Despite this, the country exported the most tea globally after China, Sri Lanka, and Kenya. Commercial tea plantations in the country were first established by the British East India Company, which led to large-scale production of the traditionally brewed native tea variety of north-eastern Indians. When introduced, tea was a high-status drink. But the booming production and consumption over decades made it economical for everyone to savor the concoction today. Unsurprisingly, tea was the most valued beverage in the retail market and was expected to continue a steady growth path.

Indian tea which is a global favorite comes from Darjeeling in West Bengal and Assam. Most tea varieties found in the country are named after the regions they are cultivated. Due to its geographical origin, Darjeeling tea became the first Indian product to receive a Geographical Indication tag in 2004-2005. About 1.3 billion kilograms of tea were locally produced across India. Most of the best-selling tea brands procure tea leaves from specific tea estates to retain their quality and authenticity. In addition, Iran was the leading importer of Indian tea followed by the United Arab Emirates and the United States in the fiscal year 2022. The most popular tea exported was black tea accounting for around 96% of all tea exports from India.

Tea drinking in India has evolved in many ways. While tea or “Chai” (in Hindi) is usually brewed from loose tea leaves, sugar, and milk, a variety of spices is added to make it more flavorful. Some regional favorites include masala chai, kadak chai, Bombay cutting-chai, Kashmiri kahwa, and Sulaimani chai. In the north, Kulhad chai is popular, named after the traditional, disposable, handle-less clay cup it is served in. The overall domestic consumption of tea was over 1.1 billion Kilograms in 2021. “Chaiwallahs” make and sell fresh tea all day, from their numerous roadside stalls throughout the country’s nooks and corners. These are widely accessible and make up an important part of the unorganized market for tea retail in India. In recent years, the rise of urbanization and the establishment of tea cafés such as Chayoos and Chai Points has led to a diverse growth in how Indians consume tea.
This text provides general information. Statista assumes no liability for the information given being complete or correct. Due to varying update cycles, statistics can display more up-to-date data than referenced in the text.
Published by Statista Research Department, Sep 14, 2022

Estimated production volume of tea across India 2022, by state 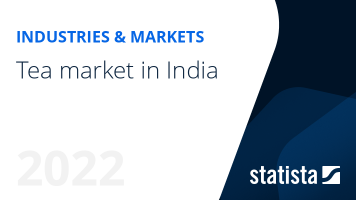 The most important key figures provide you with a compact summary of the topic of "Tea market in India" and take you straight to the corresponding statistics.