Published by Jan Conway, Oct 7, 2020
Guinness beer traces its origins back to the year 1759 in Dublin, Ireland. Its unique flavor and creamy texture has secured its lasting popularity both in Ireland and the rest of the world. The Guinness brand is worth approximately four billion U.S. dollars, making it one of the most valuable and widely recognizable beer brands in the world. As of 1997, Guinness has been part of the multinational alcoholic beverages company Diageo. In the United States, Guinness makes up nearly two percent of the total beer market. A recent survey showed that around eight percent of affluent American households consumed or served Guinness in 2017.
2017 was a good year for Guinness, with net sales growth reaching eight percent worldwide, compared to only two percent of growth in the year before. However, with the outbreak of the coronavirus pandemic in 2020, Guinness was hit with a sales decline of 16 percent compared to the year before. In North America, the sales decline was less substantial than globally, with sales declining around 5 percent compared to the previous year. For any beverage company, marketing and advertising is crucial for keeping the brand alive and relevant. Guinness’ parent company Diageo spent 727 million British pounds on marketing in North America in 2020.

In the following 4 chapters, you will quickly find the 29 most important statistics relating to "Guinness beer". 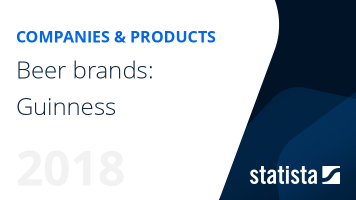 The most important key figures provide you with a compact summary of the topic of "Guinness beer" and take you straight to the corresponding statistics.