Wearable electronic devices have quickly become an integral segment of the consumer electronics industry. Wearables come in various forms and serve a vast array of purposes for their users, such as fashion accessories, fitness trackers, gaming devices, and navigation tools. Smartwatches are one of the most popular wearables categories globally and are expected to generate revenues of 53.6 billion U.S. dollars by 2025, with shipments of more than a quarter of a billion units in the same year.

Fitbit, a company that had long been the leader in the wearables industry in terms of unit shipments, lost its top position to Apple back in 2017 and was acquired by Google in 2021. Apple has been the industry leader in the wearables segment ever since, with almost nine billion euros in revenue coming from the wearable segment in early 2022. The industry is also awaiting new wearable device releases from Samsung in the coming years, with the company being one of the largest owners of wearables patents. One of the other most notable players targeting budget-conscious consumers in the smartwatch market is Xiaomi.

Apple is undoubtedly the brightest star in the soaring smartwatch industry, positioned as the leading smartwatch vendor with more than 50 percent share of the market. Although Google entered the smartwatch market late with a product of its own, it has still managed to establish itself as a significant player within the industry thanks to the success of the Android mobile operating system and Wear OS. With the acquisition of Fitbit and future Samsung watches carrying Wear OS, Google will acquire a greater share of the market based on the smartwatch platform.
This text provides general information. Statista assumes no liability for the information given being complete or correct. Due to varying update cycles, statistics can display more up-to-date data than referenced in the text. 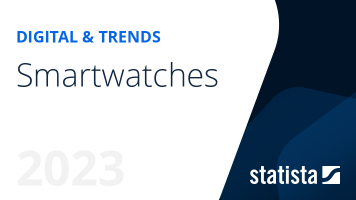 The most important key figures provide you with a compact summary of the topic of "Smartwatches" and take you straight to the corresponding statistics.