Mexico holds the second place, behind Brazil, as Latin America’s largest ad market, accounting for 18 percent of the region’s advertising spending in 2020. That year, Mexico’s advertising expenditure amounted to 3.65 billion U.S. dollars and it is expected to grow by some 700 million by the end of 2022. On a global scale, Mexico ranks a bit lower - in 2021 the country took up spot number 20 among the world’s largest ad markets.

In 2021, media spending in Mexico exhibited a similar trend experienced all over the world, namely the internet took over TV advertising spending that year. The formats with the highest growth that year were social media and video, followed by search and display. Digital advertising in the North American market has been mostly occupied by online stores, with the industry accounting for nearly 13 percent of Mexico’s 2020 digital ad expenditure. Online shops along with other industries utilizing digital advertising in the country have also been investing more in advertising via mobile phones and other portable devices. It was estimated that nearly 74 percent of Mexico’s digital ad expenditure was spent on such mobile advertising in 2020, which is about a 10 percent increase from two years prior.

Although digital advertising’s popularity is growing and spending in the traditional broadcast medium is still expected to decrease, TV remains an important ad medium in the country. The year 2020 saw TV ad spending in Mexico amount to 1.5 billion U.S. dollars, and the figure is set to grow to 1.8 billion by the end of 2025. However, other traditional forms of advertisement are on a decline. Mexico's newspaper advertising expenditures, for example, fell from 4.7 billion Mexican pesos (roughly 238 million U.S. dollars) in 2017 down to 1.98 billion pesos in 2023 (approximately 99 million dollars). As spending in newspaper advertising dwindles, magazine advertising in Mexico is declining even more significantly. All in all, radio, OOH, and print is far behind digital and TV spending in the country.
This text provides general information. Statista assumes no liability for the information given being complete or correct. Due to varying update cycles, statistics can display more up-to-date data than referenced in the text.
Published by Julia Faria, Jan 6, 2023 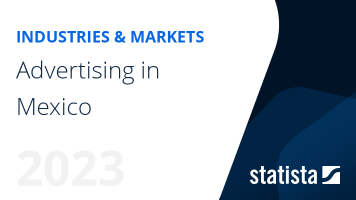 The most important key figures provide you with a compact summary of the topic of "Advertising in Mexico" and take you straight to the corresponding statistics.