Bharti Airtel Limited, commonly known as Airtel, is an Indian global telecommunication service company headquartered in New Delhi, India. Established in 1985, Airtel is one of the leading global telecommunications company providing services in 18 countries across Asia and Africa as of financial year 2021. Moreover, it is the second largest cellular network service provider in India in terms of subscriber base. As of March 2022, Bharti Airtel accounted for over 33 percent of the rural telecom market across India. It has a significant presence in urban India as well.
The traditional telecom market leaders in India have encountered severe competition in recent years due to the introduction of many new players into the market. Despite this, Airtel had a share of about 31.6 percent in the wireless subscriber market and ranked second only to Bharat Sanchar Nigam Limited (BSNL), a state-owned company in the wireline subscriber market across India.

Bharti Airtel offers its customers telemedia and digital TV services along with its widely popular mobile services. The subscriber base for all its services is gradually increasing across the country. Bharti Airtel digital TV services had a subscriber base of about 17.56 million in India as of fiscal year 2022. The different services that Airtel offers to its customers and its ever-increasing subscriber base has led to Bharti Airtel becoming one of the leading brands across India. The brand value of Bharti Airtel was about 7.7 billion U.S. dollars in 2022. Venturing into diverse roles - mobile data services, digital television, software and cloud products to the fastest growing market, Airtel has a strong hold in the Indian market.
This text provides general information. Statista assumes no liability for the information given being complete or correct. Due to varying update cycles, statistics can display more up-to-date data than referenced in the text.
Shangliao Sun
Research expert covering India
Get in touch with us now
Published by Shangliao Sun, Sep 22, 2022 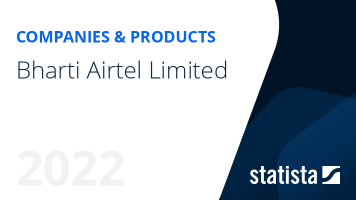 The most important key figures provide you with a compact summary of the topic of "Airtel" and take you straight to the corresponding statistics.