Published by L. Granwal, Mar 29, 2022
Evolution Mining Ltd was founded in 2011 through the merger of Catalpa Resources Ltd and Conquest Mining Ltd and is now a leading Australian gold mining company with a strong focus on growth. The company operates gold mines in New South Wales, Queensland, and Western Australia and holds an economic interest in Ernest Henry mine in Queensland. Evolution Mining is involved in gold, silver, and copper exploration and mining operations, with most of its revenue coming from the gold segment. In terms of market capitalization, Evolution Mining was one of the leading gold mining companies listed on the ASX in 2021.
Mining in Australia is a significant primary industry and large contributor to the Australian economy. The value added by the mining industry in Australia amounted to approximately 206 billion Australian dollars in financial year 2020. Globally, gold is seen as a robust investment, with gold jewelry accounting for around half of the total global gold demand. The total gold production volume in Australia was around 321 metric tons in 2021. Unsurprisingly, gold is one of Australia’s largest resource exports by value. Historically, mining booms have encouraged many immigrants to move to Australia. By 2025, the gold mining industry is forecast to employ around 26.5 thousand employees.

In the latest financial year, around 681 thousand ounces of gold were produced by Evolution Mining and its revenue amounted to almost 1.9 billion Australian dollars. Evolution Mining has frequently been awarded accolades such as the NSW Mining Safety Excellence Award and Miner of the Year, awarded by the Australian Gold Mining Journal.

In the following 5 chapters, you will quickly find the 26 most important statistics relating to "Evolution Mining Limited ". 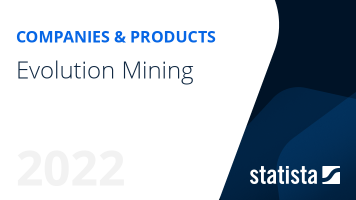 The most important key figures provide you with a compact summary of the topic of "Evolution Mining Limited " and take you straight to the corresponding statistics.