Published by
Aaron O'Neill,
Apr 22, 2021
A small country on the Gulf of Aden in northeast Africa, Djibouti is a small country, home to roughly one million people. With a relatively low gross domestic product (GDP) generation, it is still an emerging nation. This translates to a fairly low but increasing life expectancy as the country continues to develop. The president, Ismail Omar Guelleh, has been in power since 1999, giving the country a sense of political stability that is not present in some of its neighbors.
Djibouti was a French colony with Arab roots. It is therefore not surprising that its closest trading partners include France and countries on the Arabian Peninsula. Because of its predictable political atmosphere and proximity to the Suez trade route, Djibouti continues to play an important strategic role both in economic and military affairs worldwide. Djibouti’s economy is small but growing. In spite of high government spending in relation to GDP, Djibouti does not tend to have a high national debt to GDP ratio. Most years, its debt to GDP ratio is lower than that of Sub-Saharan Africa . One of its most important economic partners is landlocked Ethiopia, which was at war with Eritrea from 1998 until 2018. During that time, Djibouti was Ethiopia’s only port.

Due to its proximity to fragile states such as Eritrea, Somalia, and Yemen, Djibouti hosts military bases from multiple international powers. The United States, France, Japan, and China all maintain a military presence. This proved useful during the Somali pirate attacks from 2009 to 2012. Given continued regional instability, the country is likely to continue hosting foreign forces for the foreseeable future.

In the following 4 chapters, you will quickly find the 34 most important statistics relating to "Djibouti". 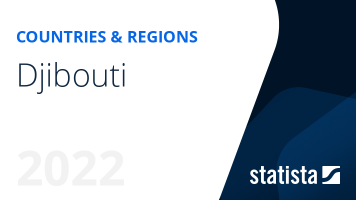 The most important key figures provide you with a compact summary of the topic of "Djibouti" and take you straight to the corresponding statistics.