As one of the most economically significant agricultural crops in the world, tobacco, is a general term given to products prepared from the cured leaves of plants belonging to the Nicotiana genus. India stands behind China and Brazil, as one of the largest producers and exporters of this product. Tobacco consumed in any form poses health risks and complications and affects a large population of passive smokers. The highly addictive alkaloids present in tobacco make it hard to quit. Despite these health issues, the tobacco industry is flourishing due to its economic importance. Tobacco is mainly produced in the southern states of Karnataka and Andhra Pradesh in India, where the weather is suitable for the crop. Smoking tobacco in India is known for its quality and places the country in the leading revenue earning bracket worldwide.

While most of the tobacco is processed into cigarettes, the leftovers are used to make the popular beedi or bidi, where tobacco is wrapped in tendu leaves. Smokeless tobacco has been quite popular in the country for centuries with variants of chewing and snuffing tobacco products. Due to easy access and low cost, products such as paan/pan, gutka, and flavored tobacco are widely consumed by young and old alike. Unfortunately, this makes for distinct red paan stains on walls all over the country. A variety of bidis and smokeless tobacco products are made in cottage industries without warnings on the packaging and sold in family-owned shops and stalls. Furthermore, at least 75 percent of cigarettes are sold as single sticks, so buyers don’t see the warnings on the packet.

Tobacco consumption has been reduced significantly in the country. Despite this, it is still used by 275 million people, and as society liberalizes more women are taking up smoking. A series of legal precautions and warnings came into effect at the turn of the millennium. It started with banning advertising of tobacco and alcohol use, followed by mandatory pictorial warnings on products. A Supreme Court judgment in 2001 banned smoking in public spaces in the country, and a series of governmental anti-tobacco advertisements followed this messaging. Public spaces and restaurants have designated areas for smoking. The ban on the sale, manufacture, distribution, and storage of gutka and all its variants was implemented in May 2013 and consequent notifications have enforced a strict ban on all smokeless tobacco products. The number of legal cigarettes has decreased while the illegal cigarette trade has increased dramatically due to high cigarette taxes and strict tobacco control laws like India's 85 percent pictorial warning on tobacco product packs.
This text provides general information. Statista assumes no liability for the information given being complete or correct. Due to varying update cycles, statistics can display more up-to-date data than referenced in the text.
Published by Statista Research Department, Jul 21, 2022 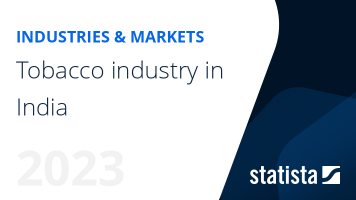 The most important key figures provide you with a compact summary of the topic of "Tobacco market in India" and take you straight to the corresponding statistics.