Published by Statista Research Department, Aug 2, 2022
The United Kingdom was the first country to generate electricity from a full-scale nuclear power station in 1956. Nuclear plants began being built in many other countries across the world, and accounted for one fourth of the UK power mix at the height of their usage in the 1990s. However, today, disagreements between local governments and developers make its future uncertain. The largest capacity addition is currently under construction at Hinkley Point C, with an expected capacity of 3,200 megawatts across two turbines.
As of 2021, the UK has 13 operational nuclear reactors across seven sites. The UK tied with Ukraine in a list of countries by number of nuclear reactors, ranking ninth behind the United States which led with 93 units. However, eight of these UK reactors are expected to reach the end of their lifecycle in the next five years.

In 2020, nuclear plants generated 50.28 terawatt hours of electricity, which translated into approximately 19 percent of total electricity generated that year. Figures have decreased since 2015, as renewables and gas-fired turbines make up increasing shares of the country’s power mix. Projections see nuclear power generation declining even further until 2025, before picking up again in the following years and producing over one hundred terawatt hours by 2035. These forecasts take into account current projects such as Hinkley Point C, which is expected to be partly connected to the power grid from 2025 onwards.

In the following 4 chapters, you will quickly find the 21 most important statistics relating to "Nuclear power in the UK". 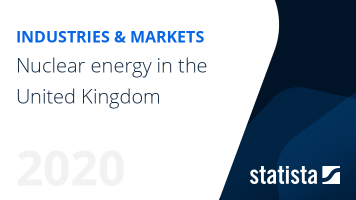 Go to report Nuclear power in the UK
Top Seller

The most important key figures provide you with a compact summary of the topic of "Nuclear power in the UK" and take you straight to the corresponding statistics.