Published by
Aaron O'Neill,
Nov 24, 2022
Bordered only by Syria, Israel, and the Mediterranean Sea, Lebanon is home to roughly 4.5 million individuals. The country’s constitution requires that power be split between the top three religious groups, the Sunni and Shia Muslims, and the Christians. This power sharing is intended to prevent another civil war but also leads to gridlock. For example, a recent shutdown of waste management caused protests criticizing the government, and residents still rate waste management as the most important environmental issue.
The economy of Lebanon has been rather unstable in recent years. Gross domestic product (GDP) per capita has been growing steadily, but the inflation rate has been volatile, with a troublesome dip into deflation in 2015. The national debt is also troubling, approaching 150 percent of GDP and fueled by a consistently negative budget balance. However, unemployment remains relatively low, under 7 percent, although youth unemployment is over twice as high. The economic situation has become strained in recent years by Syrian refugees. Displaced migrants comprise over a quarter of residents in the country.

The pluralistic political arrangement leads to an interesting social climate. Unlike many other Arab nations, 50 percent of Lebanese millennials consider their country to be their main source of identity. The share of Facebook users is high, and many Lebanese get their news from Facebook before any other form of social media. The Lebanese are also relaxed about alcohol, although many still do not drink. Wine consumption in Lebanon is low when compared to Europe, but significantly higher than in the Gulf States, many of which still prohibit any alcohol.

In the following 4 chapters, you will quickly find the 39 most important statistics relating to "Lebanon". 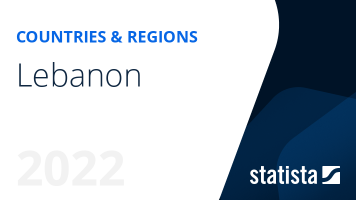 The most important key figures provide you with a compact summary of the topic of "Lebanon" and take you straight to the corresponding statistics. 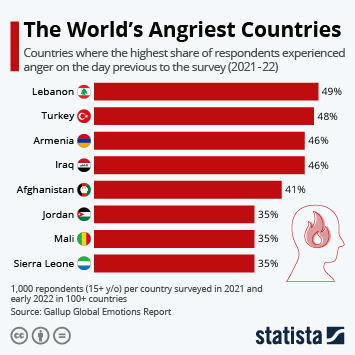 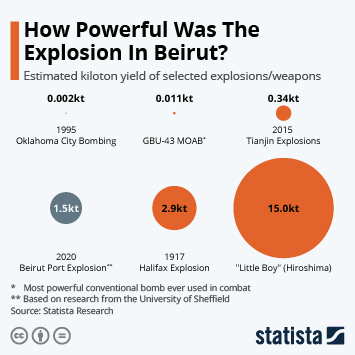 How Powerful Was The Explosion In Beirut?