Driving in the UK - Statistics & Facts

Published by
Mathilde Carlier,
Apr 19, 2022
For the majority of people living in Great Britain the car is an inherent part of their daily lives. In 2017 it was the most common mode of transport not just for personal travel trips, but also as a means to commute to work. 68 percent of the British population drove their car to work, with 11 percent using rail services.
Regarding driving tests taken, the pass rate for practical tests had been increasing in the last ten years. In 2017/18, men had performed better than women by a margin of seven percent. By comparison, women were more likely to succeed the theory tests, although pass rates had been declining in recent years. Overall, the number of attempted theory tests amounted to nearly 1.9 million, with roughly half of them being successful.

In terms of road safety, 2017 recorded the lowest number of car occupants insured since 2012, with 100,082 instances reported. Figures for pedestrian casualties echoed this development, although 2017 had seen a slight increase compared to the previous year.

Unsurprisingly, the most common types of roads found in the United Kingdom were minor roads, which ran for a total length of roughly 215,300 miles as of 2017. This made them nearly ten times as long as the next entry, Principal ‘A’ roads. However, rural ‘A’ roads accounted for 30 percent of all road traffic, making them the most used.

In the following 4 chapters, you will quickly find the 29 most important statistics relating to "Driving in the UK".

The most important key figures provide you with a compact summary of the topic of "Driving in the UK" and take you straight to the corresponding statistics. 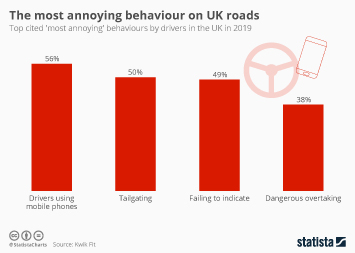 most annoying behaviour on UK roads