Published by
Erick Burgueño Salas,
Apr 20, 2022
In 2019, public sector spending on transport amounted to roughly 32.6 billion British pounds. More than half of which was used for railways specifically. By comparison, the overall share of public expenditure on local public transport was eight percent that same year, with figures having stayed relatively stable since 2015. In 2019, the average weekly household spend on transport services was 28.4 British pounds for 30 to 49 year-olds. This was also the age group which spent the most on these services.
Regarding bus journeys, the largest number was made in England at 4.1 billion, with London accounting for almost half of these in 2019. In the past three years these figures have been steadily declining. However, operating costs for local bus services have been increasing in recent years, climbing from 2.7 billion British pounds in the 2004/05 financial year to roughly 3.8 billion in 2018/19.

In contrast, passenger journeys taken on the London Underground have recorded net growth, with over 1.3 billion trips made in 2018/19. That same year, revenues from ticket sales reached 2.7 billion British pounds in total, while 2016/17 was the first year in which sales revenues from season tickets overtook those from ordinary ones.

In the following 4 chapters, you will quickly find the 30 most important statistics relating to "Public transport in the UK".

The most important key figures provide you with a compact summary of the topic of "Public transport in the UK" and take you straight to the corresponding statistics.

Public buses in the UK 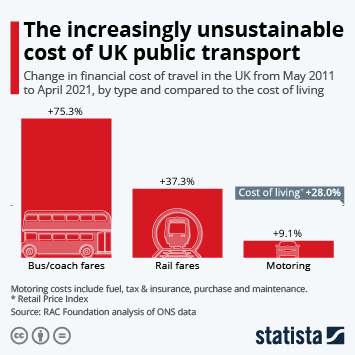 change in costs of UK public transport and motoring