Published by Statista Research Department, Aug 2, 2021
The “criminalization vs. legalization” of abortion has been one of the most controversial topics of the past decades. This subject presents a dilemma between the obligation of the State to ensure the right to life, to provide health policies, and to respect its citizens’ sovereignty over their bodies. Abortion law emerged in the mid 20th century to regulate the practice of pregnancy termination. Especially in the developing world, induced abortions are a public health need that stems from a lack of proper contraceptive care and sexual education. In Latin America, abortion is legal nationwide and without restrictions as to cause in only four countries: Cuba, Puerto Rico, Uruguay, and Argentina.
In this region, public opinion concerning abortion is divided. In a survey conducted in 2020, over one third of Latin Americans said they were in favor of legalizing voluntary pregnancy terminations under certain circumstances (for example, rape). Only 26 percent of respondents thought abortion should be allowed if a woman so decides, but another 29 percent of respondents answered that abortion should be, on principle, forbidden.

Laws regarding abortion and the severity of the situation vary from country to country. Argentina is the latest Latin American country to legalize abortion no matter the cause, up until the 14th week of pregnancy. Before December 2020, when the Argentine Senate passed the new law, voluntary pregnancy interruption was only allowed under certain circumstances: in case of rape and if the pregnant person’s health or life was in danger. Recent data shows that women in their twenties were the most affected by the deadly consequences of clandestine abortions in Argentina in their twenties.

Even so, Argentina is one of the Latin American countries with the highest percentage of population supporting abortion legalization: according to a survey, up to 41 percent of respondents either strongly or somewhat agreed that this practice should be decriminalized. Another study showed that 35 percent of Argentinians believed abortion was the pregnant woman’s choice to make. Peru was on the other end of the spectrum, as around 40 percent of Peruvians participating in the survey thought abortion should be, as a rule, forbidden.

In Brazil, pregnancy termination is decriminalized in three situations: if the pregnancy is the result of rape, if performing an abortion is the only way to save the pregnant person's life, or if the fetus suffers from anencephaly. In 2020, the number of post-abortion procedures performed in Brazil rose up to nearly 170 thousand. Most Brazilian women that had an abortion in 2016 were of brown ethnicity, Catholic, and married or in a stable relationship.

In the case of Chile, abortion is legal in very few cases: if the pregnancy poses a life risk, if the fetus is nonviable, or if the pregnancy is the result of rape. In 2020, most legal abortions in Chile were performed because the fetus would not have been able to survive after birth. Even so, only a handful of illegal abortion cases end up in criminal convictions in Chile every year.

In Colombia, abortion is also decriminalized under very specific circumstances: when the pregnant person’s physical or mental health is at risk, when the fetus will not survive the gestation (or if its disability would result in an unworthy life), and when the pregnancy is the result of rape, artificial insemination or the implantation of a fertilized egg. Oriéntame and Profamilia are two renowned organizations that assist with unwanted pregnancies in the country.

Finally, in Mexico, the legal status of abortion varies from state to state. Mexico City, Oaxaca, Hidalgo, and most recently Veracruz are the federal entities with the most progressive laws on the matter: pregnancy termination is decriminalized up to twelve weeks of gestation. Medical abortion is, by far, the most common practice to terminate pregnancies in Mexico City. A recent study showed that induced abortion was a decision mostly taken by single women in Mexico. Even with its jurisdictional and 12-week period limitations, Mexico is one of the few Latin American countries that allow voluntary abortions without further restrictions regarding reasons or circumstances.

In the following 6 chapters, you will quickly find the 33 most important statistics relating to "Abortion in Latin America".

The most important key figures provide you with a compact summary of the topic of "Abortion in Latin America" and take you straight to the corresponding statistics. 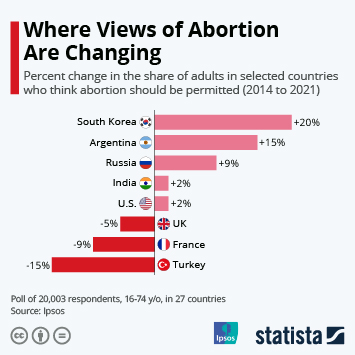