Published by Statista Research Department, Jun 21, 2022
CBRE Group is a publicly traded American company that specializes in commercial real estate services. Founded in California in 1906, it is now headquartered in Los Angeles and serves clients from all over the globe. It was one of the largest real estate investment managers worldwide and the top multifamily lender in the United States. In 2021, CBRE Group had assets under management amounting to almost 22.1 billion U.S. dollars.

Each year, CBRE’s growth can be tracked by the rapidly increasing number of employees of the group, from 29,000 individuals in 2009 to around 105,000 in 2021. In the same year, the group generated 22.1 billion U.S. dollars in revenue, which was a slight decrease from the previous year. Across the different regions it operates, CBRE’s largest market is the United States. However, a breakdown of the group’s revenues in the past five years shows the company’s business growing not only in the U.S., but also in the United Kingdom (UK) and other countries. In fact, in 2021, CBRE’s revenues in the U.S. decreased slightly, while in the other markets they rose. With the exception of 2020, CBRE’s net income has been continuously growing on a year-on-year basissince 2010.

CBRE operates across different segments, such as advisory services, global workforce solutions, and real estate investment. Of the three major sectors, advisory services is the most profitable sector for the company and since 2019, it has accounted for over 60 percent of the group’s operating profit. In 2021, CBRE acquired majority ownership interest and entered in a strategic partnership with Turner & Townsend – a UK headquartered company that offers program management, cost consultancy, project management, and advisory consulting and operates in 46 countries.

In the following 4 chapters, you will quickly find the 22 most important statistics relating to "CBRE Group". 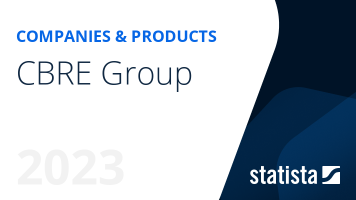 The most important key figures provide you with a compact summary of the topic of "CBRE Group" and take you straight to the corresponding statistics.

Commercial property in the U.S.