Buying a home is a huge investment for just about anyone; it requires years of planning ahead, saving, and financing, and even more so if one wants to purchase a luxury house or apartment. Despite the high price tag, the demand for luxury housing worldwide is on the rise. To put this in perspective, in 2014 it took an average of 254 days to sell a luxury home, and by 2017 this figure had dropped to around 190 days.
Depending on the location, a luxury home can vary in price significantly. Hong Kong has the highest average price per square foot of prime residential property worldwide, at 4,670 U.S. dollars according to 2018 data. On the other hand, the average price of a square foot of fine real estate in Madrid amounted to only 730 U.S. dollars in that year. As of April 2019, the top two most expensive residential real estate sales worldwide both occurred in Hong Kong. Ho Tung Gardens on the Peak in Hong Kong sold for 657.9 million U.S. dollars, which was a significantly higher amount than the second most expensive property.

For the ultra-wealthy, it is not uncommon to own multiple residential properties. A 2018 survey of private bankers and wealth advisors found that the average ultra-wealthy individual owned around 3.6 homes worldwide. In Latin America, this figure amounted to 4.71 homes, the highest of region in the world. The gap between millionaires and demi-billionaires is also vast in terms of home ownership. Demi-billionaires are those who have at least half a billion U.S. dollars in assets. The average millionaire in 2018 owned two homes, while the average demi-billionaire worldwide owned about ten homes.
This text provides general information. Statista assumes no liability for the information given being complete or correct. Due to varying update cycles, statistics can display more up-to-date data than referenced in the text.
Published by Statista Research Department, Aug 25, 2021

Growth rate of prime property prices in Berlin in the last decade
145.7%

Price per sf in selected prime residential markets worldwide in 2018

Annual change in luxury home prices in selected markets in the U.S. Nov 2021 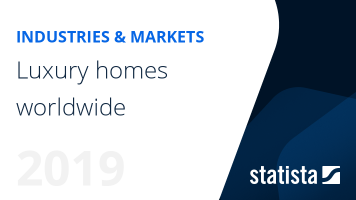 The most important key figures provide you with a compact summary of the topic of "Global luxury home market " and take you straight to the corresponding statistics.