Published by Statista Research Department, Nov 28, 2022
The gradual recovery of fertility rates since 2000 in Russia had a positive impact on the children’s toys and games industry. In 2022, its revenue was estimated at around seven billion U.S. dollars, making Russia one of the leading markets worldwide. The retail trade share of children's games and toys has been accordingly expanding over the past years, reaching 1.4 percent in 2021.

Sales of games and toys for children in Russia exceeded 226 billion Russian rubles in specialized stores alone in 2021. Residents of the capital city Moscow demonstrated the highest per capita spending on children's toys, at over 3.3 thousand Russian rubles. Among various products, construction sets accounted for the largest sales value, which can be explained by the elevated retail prices of such items relative to other entertainment articles. Dolls and wheeled toys together generated nearly a third of the sales value.

When asked about the main criteria for choosing children toys and games, roughly two thirds of Russians listed product quality and safety of use. Furthermore, more than a half mentioned that the toy should be liked by children. The major online retailer of the products in question was Wildberries, with sales exceeding 106 billion Russian rubles in 2021. At the same time, Detsky Mir ranked first by omnichannel performance points. In November 2022, the board of directors announced a plan to convert Detsky Mir from a public enterprise into a private entity in a bid to conduct business in a more flexible and efficient way.

Foreign trade in toys and games

The export trade in the Russian children’s toy market has witnessed a significant and accelerated growth since 2016. The import-export gap, however, remains significant to this date. In 2021, the import value of children’s toys, games, and sports requisites to the country was about 2.1 billion U.S. dollars greater than the value such commodities exported from the country. The principal import partner was China, amounting to 1.8 billion U.S. dollars during 2021. The major export destination for Russian toys was Kazakhstan.

In the following 5 chapters, you will quickly find the 31 most important statistics relating to "Children's toy and games market in Russia". 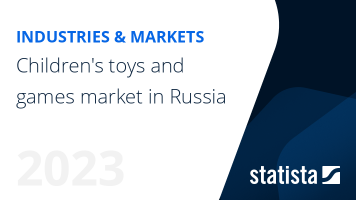 The most important key figures provide you with a compact summary of the topic of "Children's toy and games market in Russia" and take you straight to the corresponding statistics.

Baby and children's products in Russia