Paying for a hotel room with a credit card, getting a new TV on a debit card, or paying for vegetables on the street via a mobile wallet: digital payments are omnipresent in the everyday life of Indians and have dramatically changed consumer behavior in the country. Many innovative FinTech companies as well as governmental initiatives have shaped the market in recent years.
In financial year 2021, over 40 billion digital transactions worth more than a quadrillion Indian rupees were recorded across the country. These numbers alone show the importance of digital payments for India’s financial services sector. Thereby, it is no surprise, that payments also mark the most important segment within the country’s vivid FinTech environment.

The National Payments Corporation of India (NPCI), founded as an initiative by the Reserve Bank of India and the Indian Banks’ Association, provides the crucial infrastructure for several payment systems. Among those services are the highly used Unified Payments Interface (UPI), which was supported by over 200 banks, as well as the card scheme RuPay as the domestic alternative to Mastercard, Visa, and UnionPay. The latter was also part of the ambitious Pradhan Mantri Jan Dhan Yojana (PMJDY) that aims at introducing digital payments and financial services to broad sections of society.

The ongoing trend in digital payments and the amount of available funds for FinTech innovations resulted in a highly contested market, especially in the e-wallet segment. Whereas GooglePay emerged as the most popular payment method in a survey in 2020, domestic provider paytm led in terms of revenue. Among the 32 Indian unicorns of 2021 were nine Fintech companies.

Despite these positive steps and ambitious figures, the country lacks the infrastructure to completely make the transition to a cashless society for now. Among the problems that users faced were failures on payment platforms, poor internet connections, and reimbursement issues. Despite the efforts to include more and more inhabitants in financial service schemes like the PMJDY, the numbers of inoperative accounts indicate that there is still a way to go, especially in rural areas, where many people depend on the unorganized sector.
This text provides general information. Statista assumes no liability for the information given being complete or correct. Due to varying update cycles, statistics can display more up-to-date data than referenced in the text.
Published by Statista Research Department, Jul 25, 2022

State with highest number of per capita digital transactions
Chandigarh

Per capita volume of digital payments in India 2021, by state

Most popular point of access for online banking
Smartphone

Status of online banking in India 2020

Number of fintech startups in India 2020, by segment 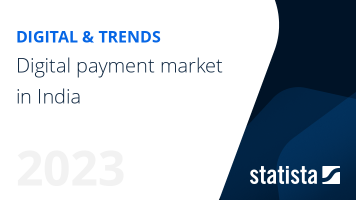 The most important key figures provide you with a compact summary of the topic of "Digital payments in India" and take you straight to the corresponding statistics.