Characteristics of the telecommunications market in Poland

In 2021, the value of the telecommunication market in Poland amounted to nearly 41 billion zloty. The penetration in households with fixed-line iInternet services was 59.8 percent. The value of the market for internet access services increased by ca. nine percent, compared to 2020. As in the previous year, the largest number of customers used services with dedicated TVK access devices, closely followed by fiber-to-the-home (FFTH) networks. The number of lines with the highest throughput has continued to grow steadily for several years - the share of lines equal to or above 100 Mb/s reaches nearly 67 percent.
Revenue from mobile telephony services increased in 2021. The total revenues of all operators were 7.2 percent higher than in the previous year. Despite a decline in sector value, it continued to be a significant area of telecommunication activity. The mobile telephony segment generated 13.4 billion zloty revenue and was the most popular communication service for both individuals and companies.

Telecommmunications network and services in Poland

However, the value of the market and the number of fixed telephony users is decreasing year-on-year. In 2021, the revenues of fixed telephony operators decreased by over 12 percent compared to the previous year. Over the last years, the stationary telephony market has recorded a systematic decrease in the volume of traffic. The total duration of fixed-line calls amounted to approx. 3.9 billion minutes. The number of minutes per subscriber declined with a decrease in call duration. Nevertheless, data transmission in mobile networks has been the most dynamically developing service over the last few years, with a total of 5900 PB of data sent via mobile telephony.
Recently, there has been an increased interest in Voice over Internet Protocol (VoIP) telephony services among users. The growth in the number of service users has translated into an increase in the value of the VoIP market by seven percent. The number of VoIP telephony users amounted to 2.6 million in 2021, which was a record result, considering the previous years.
Nowadays, the development of telecommunication networks is carried out mainly by increasing fiber node length. For several years now, Poland has been intensively expanding its access networks. In 2027, the lenght of fiber optic networks amounted to 421 kilometers. This type of network enabled or improved such activities as watching films, making audio/video online calls, or listening to music online.

In the following 7 chapters, you will quickly find the 58 most important statistics relating to "Telecommunication industry in Poland". 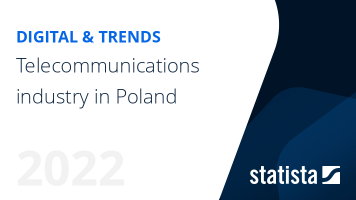 The most important key figures provide you with a compact summary of the topic of "Telecommunication industry in Poland" and take you straight to the corresponding statistics.