SSE plc is one of the largest energy providers in the United Kingdom (UK). It is counted among the Big Six energy suppliers in the country. Formed in 1998, it was previously known as Scottish and Southern Energy plc. The company is headquartered in Perth, Scotland and owns two electricity networks and one transmission network in Northern Scotland and Central Southern England.
In its fiscal year ended March 2020, SSE made 6.8 billion British pounds in revenue and 466.1 million British pounds in net profits. The company restructured its business segments in 2018/19 and divested its gas production segment and assets in order to build a business model in line with the United Nation’s Sustainable Development Goals for 2030. As such, the company aims to reduce carbon intensity of electricity generation by 50 percent until 2030, to reach 150 grams per kilowatt hour.

With respect to SSE’s output from renewable sources, it increased over twofold since 2011, amounting to 10.7 terawatt hours in 2020. In 2019, overall renewable electricity generation in the United Kingdom reached 119.3 terawatt hours. Gas-fired turbines still account for the greatest share of the country’s power mix, although renewables have seen a greater year-on-year growth rate in recent years.

The company supplies gas to some 2.4 million households and also serves an additional 478,000 non-domestic customers. SSE held a domestic energy supply market share of between 13 and 12 percent in 2019, making it the second largest energy supplier to households after British Gas. In 2018, it was also the second most profitable Big Six supplier to non-domestic customers, having generated 52 million British pounds.
This text provides general information. Statista assumes no liability for the information given being complete or correct. Due to varying update cycles, statistics can display more up-to-date data than referenced in the text.

Bruna Alves
Research expert covering energy and environment
Get in touch with us now
Published by Bruna Alves, Jul 5, 2021 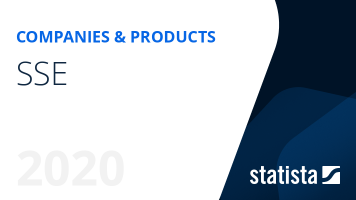 The most important key figures provide you with a compact summary of the topic of "SSE plc" and take you straight to the corresponding statistics.