Published by Statista Research Department, Nov 17, 2022
In a world where connectivity is key, the telecommunications industry proved to be one of the most essential industries as it enabled personal and professional communication and was a key tool used by businesses. In the Philippines, improved telecommunications infrastructure facilitated a digital transformation, especially at the height of the COVID-19 pandemic. Thanks to the roll-out of the 5G mobile network and the introduction of a third telecommunications provider, the industry poses growth in succeeding years as reflected in the sector’s increasing gross value added contribution to the Philippine economy.

The state of telecommunications infrastructure

The Philippines’ telecommunications infrastructure is still on its way toward reaching its goal of being a global communications hub. With a focus on the mobile market, the government pushes to improve the rollout of mobile networks by introducing a common tower policy that will delist the telecom sector as a public utility. As of December 2020, the Philippines has nearly 23 thousand combined cell towers operated by the three major telecom companies. Ultimately, this will lead to the entrance of foreign investors thus transforming the current infrastructure landscape. In its current state, the mobile network in the Philippines is still dominated by either 3G or 4G connections, while rural areas have been limited to either 2G or 3G network access.

Meanwhile, the 5G network was introduced at the beginning of 2020, and mobile network operators have started offering this technology to their customers. Across the globe, the Philippines ranked next to China and the United States according to the number of cities covered by the 5G network. Although its average download and upload speed remains meager compared to its neighboring countries in the region, the 5G connection is expected to continue improving in the following years.

While the mobile segment is dominating the market, the fixed line segment remained underdeveloped. Of the countries in the region, the Philippines ranked one of the lowest in fiber-to-home subscriptions in 2018. Fixed-line broadband penetration however, shows gradual growth.

The industry has long been dominated by a duopoly between PLDT and Globe Telecom, which both provide fixed-line networks, fixed broadband, and mobile network services. Challenging the duopoly was Dito Telecommunity, which is partly owned by Chinese state-owned China Telecom. Dito started its commercial operation in March 2021 with a focus on mobile services and has announced plans to offer high-speed broadband services in 2022. In terms of internet speed, Smart Communications, a subsidiary of PLDT, took the lead among other mobile network providers. Meanwhile, Globe dominated the mobile subscription market , holding more than half of the total share of mobile subscribers which mostly have a pre-paid subscription.

In the following 6 chapters, you will quickly find the 32 most important statistics relating to "Telecommunications industry in the Philippines". 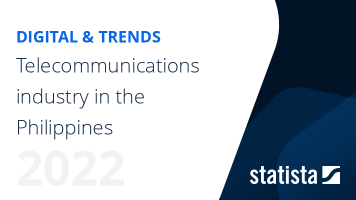 Go to report Telecommunications industry in the Philippines
Top Seller

The most important key figures provide you with a compact summary of the topic of "Telecommunications industry in the Philippines" and take you straight to the corresponding statistics.

Internet usage in the Philippines

Social media in the Philippines

Streaming in the Philippines

Mobile internet & apps in the Philippines