The past few decades have brought with them countless technological innovations, none more impactful to people’s daily lives than the internet. By allowing users to communicate around the world in real time and facilitate the rapid exchange of information, the internet has redefined what is possible and is an integral feature found in many of the innovations that have come since. Web browsers serve as the software gateway through which users can access the internet and request/receive information. Billions of people around the world use web browsers in order to access the internet, with Google Chrome, Safari, Internet Explorer, and Firefox being some of the most popular browser options.

Although they often fall under the same name, the world’s most popular web browsers such as Chrome and Safari release numerous software versions which are tailored for optimal performance on specific types of devices. Google’s “Chrome” line of browsers are the leading products across essentially all devices and specifications, controlling nearly two thirds of the global web browser market. Chrome for Android, a Google product optimized for Android mobile devices, ranks as the most popular browser in the world, while Chrome 91.0, one of Google’s desktop internet browser versions, ranks as the most popular browser for desktops. Less than a couple of years ago, the ranking of the different browser types was still reversed: mobile devices have overtaken PCs to become the most prevalent way of accessing the internet. The dominance of Chrome has led to the decline of browsers like Internet Explorer and Firefox, programs which previously served as some of the market’s strongest brands. Apple’s Safari browser ranks as the clear second place in terms of global market share and is particularly competitive in the U.S. market thanks to the widespread use of iPhones.

In addition to serving as the gateway for users to access the internet, web browsers also serve as the portal for viruses and malicious software to access users’ devices. SQL injection, a security vulnerability that enables malicious actors to bypass application security measures and access database servers, represents the largest share of web application vulnerabilities around the world, and browsers serve as one of the most commonly exploited applications in the world. Given the massive amount of personal information passing back and forth on web browsers, security is of utmost importance. In order to retain their userbases, browsers like Chrome and Safari must continue to provide a product that consumers enjoy, while ensuring that their data is safe.
This text provides general information. Statista assumes no liability for the information given being complete or correct. Due to varying update cycles, statistics can display more up-to-date data than referenced in the text.

Most popular web browser version in the world
Chrome for Android

Global market share held by web browsers as of August 2022 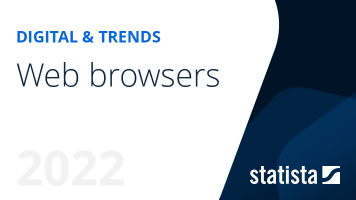 The most important key figures provide you with a compact summary of the topic of "Web Browsers" and take you straight to the corresponding statistics.