Trendsetters and branded golden geese, influencers have become key players on the internet. Among them are world-famous personalities from the world of cinema, modeling and television, but also, and increasingly, ordinary men and women, who have become famous thanks to various digital platforms. Some of them don't have to be envious of traditional celebrities who also benefit from a large community of several million subscribers on social networks. But it is more precisely the younger generation of women with an average age of between 25 and 40 who act as influencing forces on social media.

Considering that only a minority of brands offer a remuneration according to more than 30 percent of influencers, the possibility to earn money through their work and their daily presence on social networks, still remains. Thus, event though the remuneration remains quite low, an influencer with even a small following can earn up to 1,000 euros annually, and it turns out in France two percent of influencers earn more than 50,000 euros a year. And with the ongoing sanitary crisis provoked by the COVID-19 outbreak, many influencers mentioned that their earnings did remain stable nonetheless

While some now make a business of it, motivated solely by money, others are much more attentive to their community and their values and are therefore not ready to promote just any product. Indeed, nearly 60 percent of influencers wanted above all to collaborate with a brand they love and that meets their values, and often declined partnerships on the basis that they did not respect the environment. Other cases in which partnerships were declined came about when the influencer did not believe in the product or simply because they did not get paid for the promotion.

Worldwide, most luxury, beauty and fashion brands said they invested between five to 20 thousands U.S. dollars in influencer marketing in 2020. In France, with 32 percent of influencers having up to 5,000 followers in December 2019, they mostly receive requests to collaborate on Instagram, the platform which has proven to create the most engagement alongside TikTok, emerging only in recent years.
Today, there are more and more influencers, representing several generations and speaking on various and varied subjects with a different tone, knowledge and perception, with cultural themes being the most discussed field, with the most influential format being articles and posts. It is therefore not surprising that the French themselves feel that certain influencers or advertisements impact on their purchasing behavior. More than 76 percent of them have already shopped through Facebook, encouraged by the promotional offers of influencers.
This text provides general information. Statista assumes no liability for the information given being complete or correct. Due to varying update cycles, statistics can display more up-to-date data than referenced in the text.
Published by Statista Research Department, Jan 6, 2023

Most covered topic by French influencers in 2020
Fashion and beauty

Ranking of influencer segments on Instagram in France 2020, by average engagement

Fastest growing TikTok influencers in France 2021, by number of followers

Engagement rate among TikTok influencers in France 2020-2021, by profile size

Profile and income of influencers

Leading influencers on other social networks 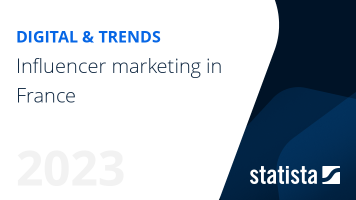 The most important key figures provide you with a compact summary of the topic of "Influencer marketing in France" and take you straight to the corresponding statistics.