Competition in the mobile communications market

After undergoing some deregulation and mergers, three major key players have emerged in the Japanese mobile communications industry: NTT Docomo, au by KDDI, and SoftBank. SoftBank Corp. operates as the telecommunications subsidiary of the Japanese multinational holding company SoftBank Group Corp., which is one of the world’s leading telecommunication operators based on revenue. Both companies are headquartered in Tokyo’s prestigious Minato ward. A breakdown of mobile phone subscribers by operator shows that SoftBank ranks third in the Japanese market. The company sells several million mobile devices via new subscription plans and device upgrades each year. When Apple entered the Japanese smartphone market in 2008, SoftBank was the first company to offer iPhones in Japan. With the launch of its own mobile carrier service in March 2020, Rakuten Mobile, Inc. further increased the competition in the mobile communications market.

A variety of services and products

SoftBank Corp. records a revenue of several trillion Japanese yen per year. The company distinguishes between four main segments: the consumer segment, the Yahoo segment, the enterprise segment, and the distribution segment. A look at the revenue distribution by segment reveals that the consumer business, which includes telecommunications services for individual customers, accounts for more than half of the company’s revenues. In this business area, the company pursues a multi-brand strategy with SoftBank, Y!mobile, and LINEMO, which are tailored towards different kinds of customers. The acquisition of Z Holdings, which operates the popular online portal Yahoo! Japan, expanded the portfolio with a wide range of internet services, such as e-commerce, membership services, and internet advertising. The move into other business areas is motivated by the growing importance of digitalization, which is expected to have a significant impact on the telecommunications market.

In the following 4 chapters, you will quickly find the 24 most important statistics relating to "SoftBank Corp.". 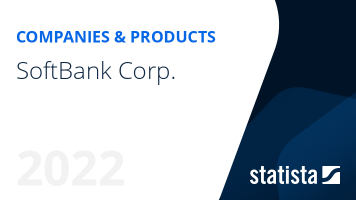 The most important key figures provide you with a compact summary of the topic of "SoftBank Corp." and take you straight to the corresponding statistics.