The Narendra Modi-led administration in India - Statistics and Facts

Published by Sandhya Keelery, May 12, 2020
The Narendra Modi-led Bharatiya Janata Party government came to power in 2014 with a sweeping majority in the election polls. They promised a bright future for India in terms of economic performance, employment rates as well as a good standing in the international arena. Initiatives such as the Swachch Bharat Abhiyan or the Clean India Mission and the Make in India projects, along with the Digital India initiative were welcomed by citizens across classes. The government modelled itself as the “people’s government”, claiming to distance politics from elitist agenda.
A majority of the public was completely taken in with the schemes of invigorating the economy through increased foreign investments and the reformed “one-size-fits-all” tax policy with the introduction of the Goods and Services Tax in July 2017. However, Modi’s notion of “Achche Din” directly translating to “good days” from Hindi, was quick to unravel. Overnight demonetization was a measure to root out corruption and cease the circulation of black money, but caused marked disruptions in the economy. The effects of this are widely debated. On the employment front, leaked ministry reports showed that India’s unemployment rate spiked to over six percent in financial year 2018. This was including a loss of about 1.5 million jobs following demonetization.

2019 saw a reelection of the Bharatiya Janata party, giving Narendra Modi a second term as prime minister. Recent months had seen open criticism across the country, with the government’s myriad controversies spilling into the socio-political sphere. Communal matters became the forefront of national politics in the months after Modi’s reelection. With the revocation of Article 370 and Kashmir’s autonomous status in August 2019, followed by the passing of the Citizenship Amendment Bill in December 2019, the country was divided and the government widely critiqued. This resulted in multiple protests across major cities, contentious debates, even leading to violence in many instances.

The coronavirus (COVID-19) pandemic in early 2020 and consequent lockdown in late March impacted an already struggling economy. Even though relief packages from the central and state governments were in effect, poorer sections of the society that depended on daily wages struggled the most, arguably the virus taking a backrow seat in their list of worries. Despite these shortcomings, Modi recorded high ratings where handling this epidemic was concerned. While lockdown measures were slowly being lifted based on infection rates in different districts, the real impact on livelihoods and lives was likely be clearer only after the smoke clears.

In the following 5 chapters, you will quickly find the 30 most important statistics relating to "The Narendra Modi-led Administration in India".

The most important key figures provide you with a compact summary of the topic of "The Narendra Modi-led Administration in India" and take you straight to the corresponding statistics.

State of health in India 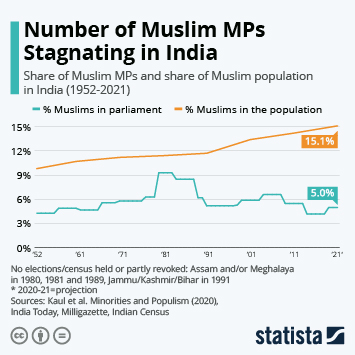 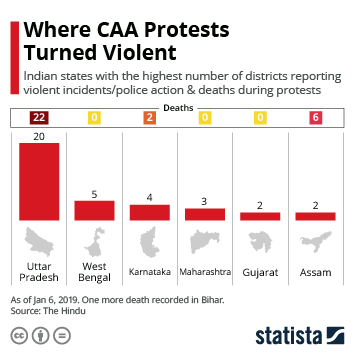