Staples in the Indian diet vary based on region and are flavored by local spices. In spite of the fact that most of the population consumes meat regularly, meat and dairy products are not a part of the Indian staple diet. Indian staple food offers a variety of vegetarian options. What makes up the staples are rice, wheat, millets, pulses, dairy, vegetables, and fruits. However, carbohydrate consumption from wheat and rice is prominent in the north and south of the country, respectively.

Millets contributed to nearly 40 percent of all cultivated grains and were the primary cereals in central and southern India before the 1960s. However, post the Green Revolution, the government policies aided only rice and wheat production rendering the cultivation of millets economically unviable. Production of wheat was so low in the post-independent era that the country had to import it to fulfil demand. The use of modern technologies and methods in the green revolution period led to the development of high-yielding and rust-resistant strains of wheat, which increased the crop's production and productivity, making India drastically self-sufficient. Another integral part of the Indian diet is pulses or lentils that are high in protein content. It is the primary protein source for vegetarians as a plant-based protein, commonly consumed as dal or lentils. While the country produces lentils, due to its popularity and the rising demand, the country imported large volumes of lentils from Myanmar, Canada, and Russia.

Despite being the world’s third-largest wheat producer, India banned the export of wheat which has led to inflation in wheat prices and other products in the international markets. In Chicago, the benchmark wheat index surged to 5.9 percent, the highest level in two months. The reason for the ban was due to the damage to wheat crops by severe heatwaves and citing a threat to food security in India due to the Russia-Ukraine war, which led to rising in local wheat prices. However, the ban is not permanent and could be changed. Before the ban, India exported wheat worth about 550 million U.S. dollars in the fiscal year 2021. The breadbasket of the world, Ukraine, has been hit by disruptions in shipments due to the invasion. However, following the Russian invasion, Ukraine’s wheat exports crashed. Commodity traders expected supplies from India to make up for part of the shortfall amid droughts and floods in other major producers.
This text provides general information. Statista assumes no liability for the information given being complete or correct. Due to varying update cycles, statistics can display more up-to-date data than referenced in the text.
Published by Statista Research Department, Jun 10, 2022 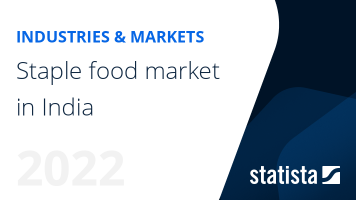 The most important key figures provide you with a compact summary of the topic of "Staple food market in India" and take you straight to the corresponding statistics.