Published by
Nina Jobst,
Nov 9, 2021
The South Korean beauty market is driven by the country’s high standards in beauty. In order to meet those standards, customers are constantly looking for new ways of improving their skin-care routine. The famous 10 step skin care routine is a good example for the willingness of South Koreans to spend money multiple beauty products at the same time. Therefore, the market is constantly innovating and developing new products. Combined with the Korean wave, also known as Hallyu, Korean Beauty products are gaining attention and popularity around the globe. In a survey conducted in countries around the world, more than a fifth of surveyed stated that the positive effect and good quality of Korean beauty products were the main positive aspects for consumers. The main negative aspect were the excessive advertisement and the high price.
Korean Beauty products got attention in Asian countries first, but popularity and availability in Western countries is growing. While the endorsement of beauty influencers is pushing sales, another reason for the widespread recognition for Korean beauty products is Hallyu, the Korean wave. Many fans get introduced to the South Korean beauty market through the pop-culture based phenomenon, since many celebrities are endorsing K-beauty products. For example, more than a quarter of female consumers in Vietnam stated that endorsements of their favorite Korean celebrity would convince them to try Korean skin care, while almost half of respondents would be influenced by their favorite beauty influencer. Additionally, given that Korean TV shows and music videos highly rely on looks, fans often get interested in how to improve their appearance.

The value of exports of beauty, make up and skin care preparations have been growing by over 700 percent during the last decade, while the volume of those exports grew by around 870 percent in the same period. Until a few years ago, users of Korean beauty products had to order them from overseas or go to specialized stores. Nowadays, mainstream drug stores around the world started to offer a small Korean beauty selection. With an increasing availability of big Korean brands in the Western market, the reach of those products grows beyond the number of Korean culture fans and is slowly becoming mainstream.

In the following 5 chapters, you will quickly find the 27 most important statistics relating to "Popularity of South Korean beauty products worldwide". 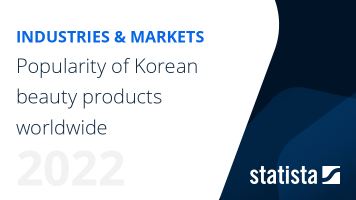 The most important key figures provide you with a compact summary of the topic of "Popularity of South Korean beauty products worldwide" and take you straight to the corresponding statistics. 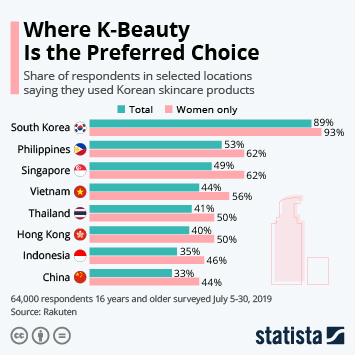