Published by
Jang Seob Yoon,
May 27, 2022
Before the outbreak of COVID-19, the South Korean sports industry was growing rapidly. As the income level and leisure time of South Koreans has increased, having a healthy lifestyle has become more important. In addition, global sports stars such as soccer player Son Heung-min and figure skater Kim Yuna have boosted the public's interest in sports. As a result, the participation rate of regular sports activities to maintain health is increasing across all generations. The size of the sports industry has also steadily increased over the years.

What kind of participation sports are popular in South Korea?

Sports facilities in South Korea are diversifying because of people who want to try out new sports. In particular, the number of fitness studios has significantly increased compared to a decade ago, which shows that the number of people participating in sports regularly has increased. Recently, fitness studios have expanded their offerings to provide personal training or scientific fitness management services, thus allowing people to enjoy sports more efficiently and smartly. The golf population is also rising, along with the size of golf facilities. The number of outdoor practice ranges and indoor or screen golf courses has also increased significantly. Screen golf courses have especially gained popularity as people can easily practice golf regardless of the weather or the time of day.

Since the 2002 FIFA Korea-Japan World Cup, South Koreans have shown an increased interest in professional sports. Although the COVID-19 pandemic has heavily impacted the industry overall, ticket sales at matches and other sporting events were on the rise since 2014. The four major spectator sports in South Korea were baseball, soccer, basketball, and volleyball. In particular, professional baseball has gained traction among younger fans, as they enjoy going to the stadium as a form of entertainment. In 2017, the professional baseball KBO league attracted the largest audience in its history. As domestic professional sports are based in a city where the home stadium is located, each local government is trying to attract a professional sports industry that will have a positive effect on the local economy.

What is the sporting goods market like in South Korea?

The revenue of the sporting goods industry in South Korea is larger than any other sports segment. Its biggest sector consists of sports clothes and shoes. However, the South Korean sportswear market has continued to remain sluggish in its growth during recent years. This is mainly due to the decreased sales of outdoor clothing brands, which has been driven by the lower consumption of mid-aged customers. Also, the sportswear market is occupied by global brands such as Nike and Adidas, so the trade deficit continues to increase as more sporting goods are imported to the country. In response to this situation, the sporting goods industry is trying to diversify and develop products in various fields such as leisure goods, camping goods, and water sports goods.

In the following 5 chapters, you will quickly find the 26 most important statistics relating to "Sports in South Korea". 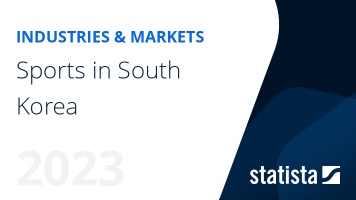 The most important key figures provide you with a compact summary of the topic of "Sports in South Korea" and take you straight to the corresponding statistics.