As the impacts of climate change become ever more visible in the daily life and halting greenhouse gas emissions gains more and more urgency, fossil fuels have come to be perceived as one of the greatest enemies of our generation. Nevertheless, in Brazil, the fossil fuel sector still plays an important role in both the global scenario and the national economy. With crude oil reserves of more than 12 billion barrels, the nation ranks amongst the top 10 leading oil-producing countries in the world. And though not ranking amongst the top global players, natural gas production in Brazil has nearly doubled in the past ten years.

Although the South American country is famous for having one the cleanest energy matrixes in the world – a result of the historical development of its hydropower potential – fossil fuels still account for more than half of Brazil’s primary energy consumption. In fact, while crude oil consumption in the Portuguese-speaking country experienced a mostly downward trend for half a decade, it remained the leading source of primary energy in 2019. In the meantime, despite representing a much smaller share of the energy supply, coal demand in Brazil is still heavily reliant on the external market, with imports adding up to billions of dollars each year.

A sector that remains mostly in government hands

Petrobras, the national oil corporation, is by far the most important player in the Brazilian oil and gas sector, with a revenue of more than 300 billion Brazilian reals in 2019 (roughly 77 billion U.S. dollars). This hegemony is the result of more than four decades of exclusive rights to oil exploration in the country. Although legally the company has not held a monopoly since 1997, it remains largely unrivaled, accounting for more than 90 percent of the national crude oil production. In recent years, however, some of the world’s oil giants have succeeded in establishing themselves in the South American petroleum potency, such as Norwegian Equinor, French Total, and Dutch Shell – the latter being also one of the largest players in the fuel distribution segment, through its licensee Raízen.
This text provides general information. Statista assumes no liability for the information given being complete or correct. Due to varying update cycles, statistics can display more up-to-date data than referenced in the text.

Bruna Alves
Research expert covering energy and environment
Get in touch with us now
Published by Bruna Alves, Jul 5, 2021

Leading companies in the oil & gas sector in Brazil 2021, by revenue

Crude oil export share from Brazil 2021, by country of destination 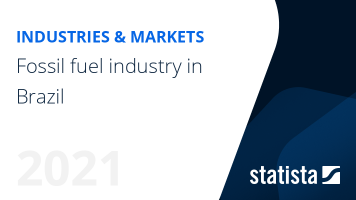 The most important key figures provide you with a compact summary of the topic of "Fossil fuel industry in Brazil" and take you straight to the corresponding statistics.