India's 17th general elections were conducted in April and May 2019 and became the world’s largest and most expensive democratic elections. Around 8,000 candidates contested for the 543 seats in the lower house of the parliament, commonly known as the Lok Sabha.
As soon as the last voting ballot was closed, exit polls began surfacing on various media and research platforms. So what exactly are election exit polls? In a nutshell, they are surveys where voters are asked who they cast their vote for, right after they have left the polling station. They differ from opinion polls in that they are conducted after the vote has been cast. Owing to discrepancies in the methods of sampling and the survey itself, many critics consider exit and opinion polls to be nothing more than election entertainment. In fact, India’s law prohibits anyone from conducting exit polls from the time the first voting booth opens until half an hour after the final phase of voting to avoid voter swaying.

The first serious attempts at exit polling began in the late 1960s in India. By the 1980s, celebrity-like psephologists including Prannoy Roy, fine-tuned the art and science of exit polling to fit a behemoth democracy like India. The Indian political scenario has always had numerous coalitions and multi-party alliances making it extremely difficult to predict election results. At the time of the 2019 Lok Sabha elections, the ruling mandate was with the National Democratic Alliance or NDA, which was a coalition between the Bharatiya Janata Party and thirteen other parties. At the same time, the opposition was held by the United Progressive Alliance or the UPA, a coalition of the Indian National Congress and other left leaning parties.

With numerous pollsters charting their ways onto media channels, there seemed to be a general leaning towards another victory for the NDA. Polls revealed that the united opposition would not be effective against BJP and their support mostly came from the western and central regions of India, like in the 2014 elections. Analysis of voting intentions from 2018 revealed that upper-class voters, especially from big cities would account for a big chunk of the vote share for the BJP. According to opinion polls by Times Now VMR, the NDA was to win 279 seats while this was as low as 267 according to poll results by C-Voter.

Eventually, the Election Commission’s results revealed that Narendra Modi’s Bharatiya Janata Party won by a landslide of 303 out of the 543 parliamentary seats. The voting trend followed the pattern of the previous election in 2014, ensuring a second prime-ministerial term for Modi. The exit polls came close in their predictions but not entirely. In the end, the 2019 Lok Sabha polls showed that even with the savviest tools at hand to understand voting intentions and exit polls, Indian voters can surprise you.
This text provides general information. Statista assumes no liability for the information given being complete or correct. Due to varying update cycles, statistics can display more up-to-date data than referenced in the text.
Sanyukta Kanwal
Research expert covering India
Get in touch with us now
Published by Sanyukta Kanwal, Nov 19, 2020 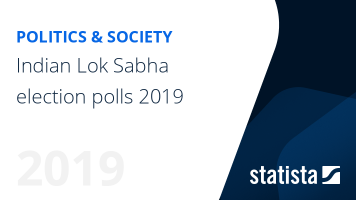 The most important key figures provide you with a compact summary of the topic of "India Lok Sabha election polls 2019" and take you straight to the corresponding statistics.