Published by
Shangliao Sun,
May 25, 2022
The telecommunication market across India was the second largest in the world. The subscriber base was over 1.1 billion at the end of 2020. Strong consumer demand and favorable policies from the Indian government played an instrumental role in the growth of the industry. The first commercial mobile phone service in India was launched by Modi Group along with the Australian telecom giant, Telstra. Because of the high call rates per minute, only the top income earners were able to use mobile phones back then. However, since the 1990’s, mobile communication in India has become more and more popular, and the services provided went beyond just texting and calling.

With a variety of smartphones and internet packages flooding the market, mobile communication became an integral part of everyday life. The smartphone industry in India saw a steady growth over the years, around 42 percent of all Indian mobile subscribers owned at least one smartphone in 2020. Indeed, this little device has seeped into the everyday life so much that Indians were spending more than three hours per day on their smartphones the same year. Early 2019 saw a growth of over 160 percent in app downloads compared to the previous two years. In the first three months that year, almost five billion mobile app downloads were registered.

Various private operators have taken over the wireless market, leading to a fierce competition for the leading position in the mobile service market, mostly among Reliance Jio, Vodafone Idea and Airtel, with Reliance Jio leading the market. Initiatives such as “Digital India” and “Make in India” also provided huge employment opportunities in the mobile manufacturing industry in the country since 2014. By 2022, the telecommunication industry in India was expected to contribute about 8 percent to the country’s GDP. It was expected that 3G would be phased out before the end of the decade or sooner, and by the end of 2026, around 329 million of mobile subscriptions would be with 5G technology. With the onset of 5G technology providing faster connection and better bandwidth, and the push to cashless society by the coronavirus pandemic, the use of mobile services has been on the rise.

In the following 4 chapters, you will quickly find the 21 most important statistics relating to "Mobile communications in India". 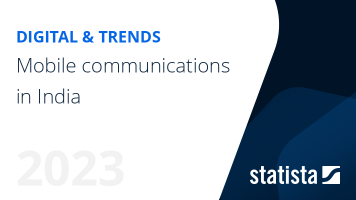 The most important key figures provide you with a compact summary of the topic of "Mobile communications in India" and take you straight to the corresponding statistics.