The Basel III accords were developed on top of the Basel II standards in response to the financial crisis of 2007 and 2008 as a voluntary framework of regulations to ensure banks around the world are meeting a minimum capital ratio. The Basel III accords were designed to strengthen a bank's capital requirements by increasing bank liquidity (the ability that bank has to meet its financial obligations when due) and decreasing bank leverage (the use of debt in order to purchase assets). The third installment of requirements, which were agreed upon by the Basel Committee on Banking Supervision, look to mitigate the risk of a further financial crisis and create a more resilient banking system.
The new strengthening of requirements made to the Basel II agreement, according to the Basel Committee on Banking Supervision, include the following:

Raising the minimum Common Equity Tier 1 (CET1) to 4.5 percent of risk weighted assets (after deductions). Common equity is the total amount of all investments made by common shareholders. A capital conservation buffer comprising common equity of 2.5 percent of risk-weighted assets brings the total common equity target to 7 percent. A countercyclical buffer with a range of 0 to 2.5 percent comprising common equity is to be applied when credit growth is judged to be in an unacceptable build-up of risk. In Europe, all banking sectors have been able to maintain a healthy tier on capital ratio and total capital ratio. Since 2014, the European Banking Authority has conducted the stress test in order to establish whether Europe's largest banks could withstand another financial crisis by measuring the capital ratio of each bank over a three-year adverse scenario. During 2018's stress test, despite a number of banks performing worse than expected, all banks were concluded to have enough capital to weather such a storm in the near future.

Liquidity in the banking sector looks at a bank's ability to meet financial obligations (when due) without incurring unacceptable losses. In line with the reforms made in the Basel III accord there are two stress test ratios specified by supervisors on the Basel committee. The Liquid Coverage Ratio (LCR) requires banks to have sufficient high-quality liquid assets to withstand a 30-day stressed funding scenario. This minimum requirement was to increase annually by 10 percent until it reached 100 percent as of 2019. As with the CET1 ratio, all countries in Europe have managed to meet the minimum requirements for LCR. The Net Stable Funding Ratio (NSFR) is a more long-term process designed to address liquidity mismatches. The requirement encourages banks to use stable sources of funding by covering the entire balance sheet.
This text provides general information. Statista assumes no liability for the information given being complete or correct. Due to varying update cycles, statistics can display more up-to-date data than referenced in the text.
Published by Statista Research Department, Jun 7, 2022

Tier one capital ratio of banks in Europe Q4 2021, by country

Liquidity coverage ratio of banks in Europe Q4 2021, by country 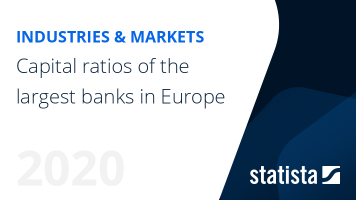 The most important key figures provide you with a compact summary of the topic of "European banks: Basel III" and take you straight to the corresponding statistics.