Published by
M. Shahbandeh,
Oct 10, 2022
Dried fruit is a typical snack and recipe ingredient used for centuries. The food has beneficial qualities such as its sweet taste and long shelf life. The bulk of the production of dried fruits are dried grapes, commonly known as raisins, and table dates. Table dates and raisins have a supply value of about 4.7 and 2.7 million U.S. dollars respectively. The United States and Turkey supply the most dried fruit and claim 30 percent of the worldwide market for dried fruit production in total.

Dried fruit has a tradition of use in Mesopotamian cuisine since 4000 BC. The Mesopotamian region includes parts of Iraq, Kuwait, Syria, and Turkey, many of whom are still top producers and exporters of dried fruit today. Turkey exports the most significant amount of raisins, while Tunisia and Iran are the leading exporters of dates worldwide. Turkey is also the leading exporter when it comes to dried apricots, with an export value amounting to a total of over 338 million U.S. dollars worldwide in 2021.

Out of the dried fruits available, U.S. consumers ate raisins more than any other fruit. Consumption of dried fruit in the United States has decreased over the past five years, dropping to a per capita rate of 1.06 pound per year in 2020. Dried fruits sometimes get a poor reputation due to the fact that some have a high concentration of natural sugars. This reputation could have influenced the frequency of eating dried fruits, as many of the diets followed by customers in the U.S. restrict the daily amount of sugar consumed. At the same time, many types of dried fruits offer health benefits by retaining the fiber, many of the vitamins, and minerals of the whole fruit. Middle East and Europe are the leading consumers of dried fruit, responsible for about 32 and 23 percent of global dried fruit consumption respectively.

In the following 4 chapters, you will quickly find the 20 most important statistics relating to "Dried fruit market". 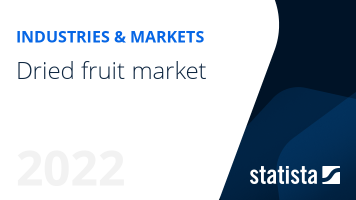 The most important key figures provide you with a compact summary of the topic of "Dried fruit market" and take you straight to the corresponding statistics.

Private label market in the U.S.

Fruit industry in the U.S.