Digitalization in the media industry in Sweden - statistics & facts

Published by Statista Research Department, Oct 5, 2022
Digitalization is one of the most wide-reaching transformational processes of the recent past. The transfer of formerly analog information and services into digital systems, accompanied by the rapid development of telecommunication services, has led to profound changes especially in the media industry. In Sweden, a country with one of the highest internet penetration rates worldwide, the shift away from traditional to digital media formats has become particularly visible in recent years. As of 2021, the number of internet users in Sweden stands at 9.12 million, and as internet adoption and mobile usage are both forecast to accelerate in the future, the digitalization and transformation of the Swedish media landscape are not expected to let up anytime soon.

The music market is one of the media industries most affected by digitalization. Thanks to the ever-growing number of music streaming services and affordable download options, demand for CDs, vinyl, and other traditional forms of audio entertainment has visibly plummeted among young listeners and older generations alike. Digital music industry revenue in Sweden, on the other hand, has increased almost tenfold over the past decade, surpassing a record figure of 1.39 billion Swedish kronor in 2019. Today, more than 50 percent of the Swedish population stream or download music on a daily basis, while approximately 91 percent of all music sales in the country are generated via streaming services. These figures are hardly surprising considering that Stockholm is the birthplace of Spotify, the most popular music streaming service in Sweden and leading audio streaming provider worldwide.

Sweden’s digital video market has also experienced significant growth in recent years due to the ever-expanding catalog of domestic and international streaming platforms. While expenditure on physical video software, retail, and rental continues its gradual decline, Swedish consumer spending on subscription video services (SVoD) peaked at 4.6 billion Swedish kronor in 2019. Today, more than 2.6 million Swedish households subscribe to video streaming services such as Netflix, which remains the most popular SVoD provider in Sweden and one of the most successful video streaming services worldwide.

The newspaper industry has experienced the most profound digital transformations in recent years. While the circulation of printed papers is still relatively high compared to other countries, audiences in Sweden are also increasingly migrating online. According to a recent study, the subscription rate for printed newspapers in Sweden lies at just ten percent among adult readers, while the rate for digital news services stands at 15 percent. Overall, the daily reach of online newspapers in Sweden has jumped to almost 50 percent, which could be explained by the wide range of free online news sources and mobile apps available to Swedish readerships.

In the following 4 chapters, you will quickly find the 29 most important statistics relating to "Digitalization in the media industry in Sweden". 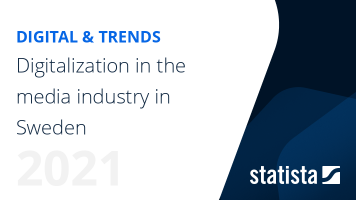 The most important key figures provide you with a compact summary of the topic of "Digitalization in the media industry in Sweden" and take you straight to the corresponding statistics.