Published by Statista Research Department, Jul 12, 2022
2020 and early 2021 saw a slowdown globally in merger and acquisition activity, with a seven percent decrease in total deal volume and 16 percent in total value. The total value of M&A in 2020 was approximately 2.8 trillion U.S. dollars across 45,700 deals. The largest deal to take place in 2020 was the unification deal between Unilever NV and Unilever PLC.

How did the COVID-19 pandemic affect M&A activity?

The economic uncertainty caused by the pandemic slowed down M&A activity in almost all regions in 2020. North America was the only exception to this and deal volume grew by 12 percent in that year. Different sectors were impacted differently by the pandemic. For instance, deal values in sectors such as telecommunications and healthcare equipment and supplies increased, whereas the value of energy and power sector deals fell significantly

How did mega-deals fare during the pandemic?

Mega-deals continued to dominate in 2020, though they accounted for a lower share of deals overall compared to previous years. Deals valued at over one billion U.S. dollars are known as mega-deals. One such deal in 2020 was China Oil & Gas Company's acquisition of PetroChina Co-pipeline assets. However, none of these deals made it into the largest deals of all time, which includes the 1999 takeover of Mannesmann by Vodafone that was still the largest all-time deal as of February 2022. 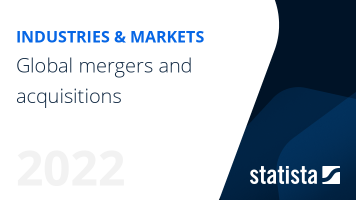 The most important key figures provide you with a compact summary of the topic of "Global M&A " and take you straight to the corresponding statistics.

Mergers and acquisitions in Europe

Mergers and acquisitions in the United States