Europe leads the way in the LCC market

On the regional distribution, the market share of low-cost carriers in Asia Pacific increased progressively during the last decade. In recent years, the active fleet size of low-cost carriers in Asia Pacific also suggests a similar tendency, surpassing the European and North American fleet size. The low-cost carrier market in North America remained rather stagnant due to the oligopoly of the more established major airlines like Southwest Airlines, American Airlines, and Delta Airlines in the region. On the other hand, the LCC market in Europe is more dynamic, meaning that many airlines are trying to enter the market while others are ceasing their operations but LCCs still hold a large share of the European market.

What are the leading LCCs in the world?

The leading two budget airlines worldwide, Ryanair and Southwest Airlines, transported only 106 million passengers in 2020 due to the coronavirus pandemic. Since 2012, Irish-based Ryanair increased its annual revenue progressively from 4.9 billion euros in 2012 to 8.5 billion euros in 2020. The Dallas-based Southwest Airlines generates at least three times more net profit than Ryanair. Although Ryanair and Southwest Airlines are market leaders in terms of size, they are not amongst the most punctual low cost carriers worldwide.
This text provides general information. Statista assumes no liability for the information given being complete or correct. Due to varying update cycles, statistics can display more up-to-date data than referenced in the text.

Ancillary revenue in the airline industry 2011-2021 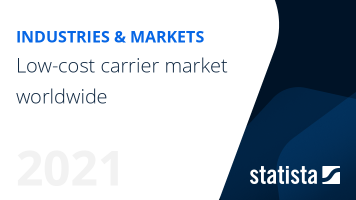 The most important key figures provide you with a compact summary of the topic of "Low-cost carrier market worldwide" and take you straight to the corresponding statistics.