Published by Statista Research Department, Jun 22, 2022
Tennis is one of the more popular sports in the United Kingdom (UK), especially since the UK hosts one of the Grand Slam tournaments, among the most famous tennis events held globally. Tennis has historically been associated with upper class members of society and despite continued efforts from its governing bodies to encourage participation, significant socioeconomic barriers continue to exist.
The Grand Slam tournaments are held annually, comprising the Australian Open, in January; the French Open, in May and June; Wimbledon in June and July; and the US Open, in August and September. To achieve the 'Grand Slam' accolade, a competitor must win all four major championships within a single calendar year and within one of the five events. In addition to this original defininition, there are also a number of other 'Grand Slam' titles within professional tennis, including a non-calendar year Grand Slam, and a career Grand Slam.

Of these four Grand Slam tournaments, Wimbledon (Wimbledon Championships) is the oldest. Since 1877, it has been taking place at the All England Lawn Tennis and Croquet Club in Wimbledon, and after the Australian Open moved to its new facilities at Melbourne Park in 1988. Wimbledon is the only major still played on grass. Roger Federer currently holds the record for men's most single title wins at Wimbledon with a total of eight titles, while the women's singles Wimbledon record holder is Martina Navratilova with a total of nine titles.

The Lawn Tennis Association (LTA) is the national governing body of tennis in Great Britain, the Channel Islands and the Isle of Man. The purpose of LTA is to promote the sport from grassroots participation to the professional game level.

In the following 5 chapters, you will quickly find the 30 most important statistics relating to "Tennis in the UK".

Statistics on the topic
Number of people playing tennis in England
641,800
Number of tennis courts in parks within Great Britain
7,149
Share of people who play tennis that are also members of a tennis club
11.7% 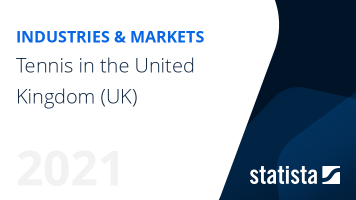 The most important key figures provide you with a compact summary of the topic of "Tennis in the UK" and take you straight to the corresponding statistics.