Recreational boating is the leisurely activity of travelling by boat, or the recreational use of a boat. Approximately 3.9 million UK adults participated in a boating activity in 2018, constituting 7.3 percent of the population.
Around 690 thousand households in the UK own a boat, of which roughly half are either a canoe or a kayak. Boating participation in the UK mostly remained stable, with approximately 7.3 percent of people in the UK going boating in 2018. The majority of boating in the UK takes place in the South East and West, followed by Scotland and the North West.

The Royal Yachting Association (RYA) is the national governing body for dinghy, yacht and motor cruising, all forms of sail racing, RIBs and sportsboats, windsurfing and personal watercraft and a leading representative for inland waterways cruising. In 2018, the estimated potential membership in the RYA was given as approximately 276.8 thousand members. In addition to the popularity of recreational boating amongst the British population, the boat and shipbuilding industries make up a significant share of the economy within the UK and elsewhere across Europe. In 2018, there were 932 boat and ship building enterprises in the UK, contributing almost six billion U.S. dollars worth of revenue to the industry. In contrast to many other European countries the UK's boat and shipbuilding industry is projected to see a decline in revenue to approximately 5.6 billion U.S. dollars by 2024.
This text provides general information. Statista assumes no liability for the information given being complete or correct. Due to varying update cycles, statistics can display more up-to-date data than referenced in the text.
Published by Statista Research Department, Sep 10, 2020

Share of people doing any recreational boating in the UK
7.3%

UK: share of people participating in any boating activity 2002-2018

Number of people doing yacht cruising in the UK
370k

Number of people doing motorboating in the UK
583k

Number of people participating in motorboating in the UK 2015-2018

UK: Demographics and Use 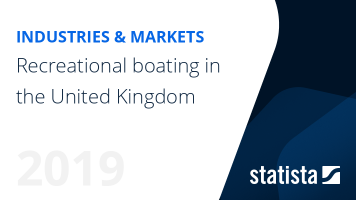 The most important key figures provide you with a compact summary of the topic of "Recreational boating in the UK" and take you straight to the corresponding statistics.