In Northern Ireland the Department of Communities' ‘Sport Matters’ strategy operated from 2009 to 2019 and focused on improving participation, performance and facilities for sport and physical recreation. As a result of this strategy, the share of the Northern Irish popultation which participated in any type of sport in 2018/2019 was 56 percent, with 26 percent of the population stating that in 2017 they were a member of a sports club. The most popular sport or physical activity in Northern Ireland is walking for recreation. When it comes to specific types of sport, swimming, keepfit, jogging and cycling are the most practiced sports in the country. Preferences appear to be rather similar between women and men, except that men tend to play more football and snooker or pool, while women tend to do more keepfit and aerobics.
Just like in the rest of the United Kingdom, football is a very popular sport in Northern Ireland. The highest football league is the Irish Premiership, for which the most expensive season tickets were sold by Glentoran, Ballymena and United Ards, with 160 British pounds each in 2018. As of March 11, 2020, the most attended match of the national football team of Ireland was against the USSR on October 16, 1985 in Lenin Stadium, Moscow (Luzhniki Stadium), with approximately 100 thousand attendees.

The national governing body for sport is Sport Northern Ireland and Sport Ireland in the Republic of Ireland. These organisations oversee and partly fund the development of sports. One of the primary aims is to assist the development of sustainable and effective structures to increase the number of participants and volunteers in sport. In 2020 Sport Ireland committed to investing over 13.8 million euros across a variety of non-governmental organisations, with the largest single investment of 1.4 million euros going towards Special Olympics Ireland.
This text provides general information. Statista assumes no liability for the information given being complete or correct. Due to varying update cycles, statistics can display more up-to-date data than referenced in the text.
Published by Statista Research Department, Sep 10, 2020

Northern Ireland: shares of people satisfied with the sports provision 2018 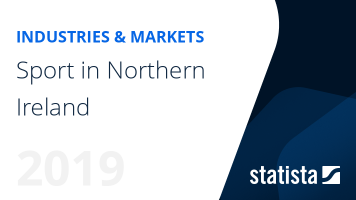 The most important key figures provide you with a compact summary of the topic of "Sport in Northern Ireland" and take you straight to the corresponding statistics.