Published by Statista Research Department, Mar 28, 2022
The coronavirus (COVID-19) has defined the 2020s on a global scale. COVID-19 is the official name for the coronavirus disease, with the first confirmed cases recorded in the Chinese city of Wuhan, located in the Hubei province, in November 2019. The respiratory disease is caused by the SARS-CoV-2 coronavirus. This is a new virus not identified in humans before, which means that treatment had not been not available at the beginning of the outbreak. The World Health Organisation (WHO) officially declared the coronavirus (COVID-19) outbreak a pandemic on March 11, 2020. After months of research, the BioNTech-Pfizer vaccine, a joint effort between Germany and the U.S., was approved by the European Medicines Agency (EMA) and the European Commission on December 21, 2020, with German vaccinations starting shortly after Christmas. Since January 6 of the same year, the Moderna vaccine is also allowed in the country.
At the beginning of the pandemic, Germany was among the European countries most affected by the spread of the coronavirus (COVID-19) worldwide. The first confirmed coronavirus case in Germany was recorded in the southern state of Bavaria on January 28, 2020. Case numbers began to rise rapidly on a daily basis at the beginning of March 2020 and continued to grow nationwide, as more members of the population got tested for the virus, many after returning from winter vacations in other severely affected European countries such as Austria, Italy and Switzerland. Each of the 16 German federal states has confirmed COVID-19 cases. Based on recent figures, case figures differ by cities and districts. In terms of coronavirus cases by gender, it is an almost even split.

While research on how exactly the coronavirus (COVID-19) spreads is ongoing, it has been established that the infection can transfer from person to person. According to the WHO, when one person already infected with the virus coughs or exhales, small droplets are released from their nose and mouth. Anyone standing close by could get infected. In March 23, 2020, the German government imposed a so-called contact ban among the population in an effort to slow down the spread of the disease. This addition to daily life is being referred to as social distancing.

Even before the introduction of the contact ban, Germany, like other European countries, had already made a number of changes to public life in an effort to protect the population from the coronavirus (COVID-19) epidemic. Daycare facilities, schools and universities were successively closed around the country, as were gyms, museums, theaters, clubs, bars, restaurants, libraries, cinemas, shops and stores. Establishments belonging to the food and health care sectors remained open and accessible to the population, though with added adjustments due to the contact ban. During April and May 2020, as the German government began easing shutdown measures, decisions were also handed down to individual state governments, with numerous establishments reopening. Social distancing and wearing protective masks continue to accompany daily life outside of the home. Germany has repeated lockdown measures after infection rates began to rise in autumn and throughout winter 2020.

The aforementioned measures meant that, as a consequence, businesses and industries in all of Germany faced serious financial issues due to the absence of customers and consumers using their services, as well as travel restrictions both on a national and international level. Another worry was reduced performance due to the possibility of more employees being on sick leave. During a survey conducted among German companies at the time, it was clear that the travel and hospitality industry in particular were already noticing the impact of the coronavirus (COVID-19) on their business. When surveyed on revenue expectations in the near future, companies varied between making estimates regarding losses and stating that currently it was not possible to make a prediction. German e-commerce was also expecting to be impacted by the coronavirus (COVID-19) epidemic, with common concerns including delivery delays or cancellations for restocking goods, as well as a revenue decline.

In the following 5 chapters, you will quickly find the 47 most important statistics relating to "Coronavirus (COVID-19) in Germany".

The most important key figures provide you with a compact summary of the topic of "Coronavirus (COVID-19) in Germany" and take you straight to the corresponding statistics. 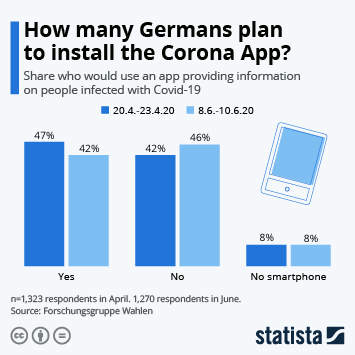 share of people who would use a coronavirus app in Germany 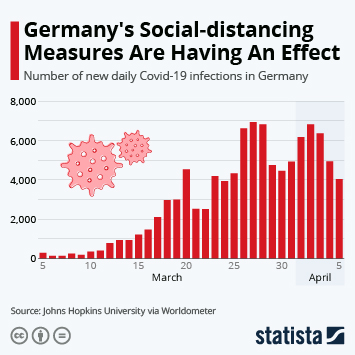