The coffee market in the United Kingdom is distinctly different from other European countries. Coffee drinkers in the UK are avid consumers of instant coffee. The top instant coffee brands reach far more consumers than their fresh ground counterparts. Instant coffee is a historical leftover from World War II, introduced by U.S. military personnel. The product took hold in what was largely a tea drinking market.

UK companies sold 34,947 tons of roasted coffee in 2020. The sales value of roasted coffee manufactured in the UK amounted to roughly 215 million British pounds. UK imports of coffee were valued at 688 million British pounds with more than half coming from non-EU countries and the rest coming from EU countries. The two leading partners for UK coffee imports were Switzerland and Brazil.

Coffee consumers in the UK most commonly drink two cups of coffee per day. Only a tenth of coffee drinkers drinks six or more cups daily. In total, consumers spent about 2.9 billion British pounds on coffee, tea and cocoa in the UK in 2021. Weekly spending on coffee by consumers amounted to 44 pence per person. This translates to roughly 25 weekly grams of coffee purchased per person in the form of beans, instant and ground coffee . The consumer price index of coffee was 102.6 in 2021.
This text provides general information. Statista assumes no liability for the information given being complete or correct. Due to varying update cycles, statistics can display more up-to-date data than referenced in the text.
Published by M. Ridder, Sep 6, 2022

Most popular type of coffee in the UK
Instant coffee

Most popular kinds of coffee in the UK 2019

Most popular instant coffee brand in the UK
Nescafé

Brands of instant coffee in Great Britain 2020, by number of users

Most popular brand of fresh ground coffee in the UK
Lavazza

Brands of fresh ground coffee in Great Britain 2020, by number of users

Expenditure on coffee, tea and cocoa in the United Kingdom 2005-2021

Brands of instant coffee in Great Britain 2020, by number of users 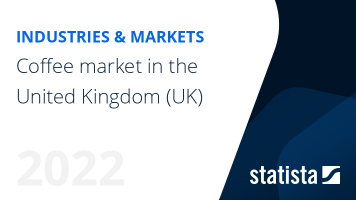 The most important key figures provide you with a compact summary of the topic of "Coffee market in the UK" and take you straight to the corresponding statistics.