Published by Statista Research Department, Jul 28, 2022
Russia is the second-largest natural gas producer worldwide after the U.S. One fifth of global reserves of that fossil fuel are located in Russia, mainly in West Siberia and the Volga-Ural oil and gas province. Furthermore, the country ranks first among gas exporters, primarily via pipelines. The national sector developed rapidly after the 1950s, when large gas fields were discovered in the Soviet Union, which opened opportunities for export trade. In 1989, the USSR Ministry of Gas Production was transformed into the state enterprise Gazprom, now a public joint stock company. Gazprom is the leader in gas production output worldwide, holding the monopoly on the Russian gas export market.

Russian gas exports during the war in Ukraine

Natural gas was one the commodities most affected by the Russian invasion of Ukraine which began in February 2022. In response to the war, Germany halted the certification of Nord Stream 2, a pipeline from Russia to Germany with a capacity of 55 billion cubic meters. Furthermore, gas prices increased across the world, particularly in the U.S. and Europe. The U.S. completely banned energy imports from Russia, while European countries pledged to reduce their reliance on Russian gas by diversifying imports, saving energy, and using more renewables. At the end of June 2022, Russia stopped supplying gas to Poland and Bulgaria after the governments of these countries rejected demands of the Russian administration to pay for gas in Russian rubles. Ukraine continued to transit Russian gas to European countries during the war; however, it stopped operating one of the transit points, Sokhranivka, due to safety reasons.

Energy security in Germany could be threatened by the reduction of gas supply via Nord Stream 1, which is undergoing maintenance. A gas turbine needed for the pipeline, which was sent for repair to Canada, was held by that country due to trade sanctions on Russia, but it was released in July 2022. In case of a potential gas shutoff by Russia, Germany's GDP growth forecast for 2023 was expected to be lowered by 2.7 percent from the baseline. Czechia, Slovakia, and Hungary were projected to experience the most significant gas shortfall under that scenario, at 40 percent of their annual demand.

What are the prospects for LNG in Russia?

In 2021, Russia exported nearly 40 billion cubic meters of liquefied natural gas (LNG), ranking fourth worldwide after Australia, Qatar, and the U.S. The exports sharply increased between 2018 and 2020, while the year 2021 saw a five percent decline in the volume. The leading countries that received Russian LNG in 2021 were Japan, China, and France. Novatek's Yamal LNG and Gazprom's Sakhalin-II are Russia's largest LNG projects up to date, and more projects are planned, including Arctic LNG 2 or Baltic LNG.

In the following 6 chapters, you will quickly find the 42 most important statistics relating to "Russian natural gas industry".

The most important key figures provide you with a compact summary of the topic of "Russian natural gas industry" and take you straight to the corresponding statistics. 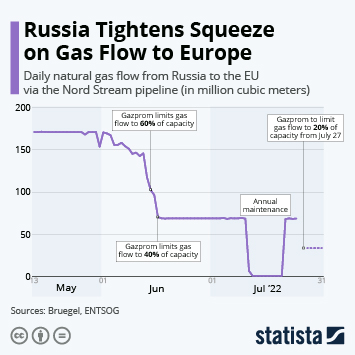 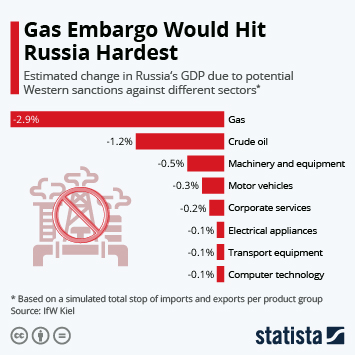