Published by
Conor Stewart,
Jul 27, 2022
During the initial phase of the COVID-19 pandemic in spring 2020, Sweden drew attention from the rest of the world due to the way it handled the pandemic. Compared to many other countries, Sweden took softer measures to prevent the spread of the virus. Sweden did not implement a lockdown nor closed its borders. The government felt a more successful strategy would be to provide recommendations rather than regulations. Restaurants and bars remained open throughout the whole pandemic, although certain restrictions such as earlier closing times, were brought in at times. Sweden has recorded the second-highest number of cases and the highest number of deaths during the pandemic compared to the other Nordic countries, although it does have the largest population in the region.

As of July 15, 2022 over 2.5 million cases had been reported in Sweden. Cases increased very sharply in winter 2021/22, as the Omicron variant became dominant. In some days during this period over 40 thousand cases were recorded in 24-hour periods. Stockholm has been up to this point the worst affected region in Sweden in terms of cases followed by Västra Götaland and Skåne. As of July 2022, over 19.2 thousand deaths have been recorded in Sweden.

As of July 24, 2022, Sweden had administered approximately 222 COVID-19 vaccine doses per 100 population. This has meant around 87 percent of Swedish adults were classed as fully vaccinated as of July 2022, which was around an average rate when compared to other countries in the EEA. Currently, vaccines from four different manufacturers are being used in Sweden, with the vast majority used so far coming from Comirnaty/BioNTech and smaller amounts of Moderna, Vaxzevria (previously called Astra-Zeneca), and Nuvaxovid in circulation.

In the following 6 chapters, you will quickly find the 33 most important statistics relating to "Coronavirus (COVID-19) in Sweden ".

The most important key figures provide you with a compact summary of the topic of "Coronavirus (COVID-19) in Sweden " and take you straight to the corresponding statistics.

Coronavirus (COVID-19) in the Benelux

Coronavirus (COVID-19) in the CEE region 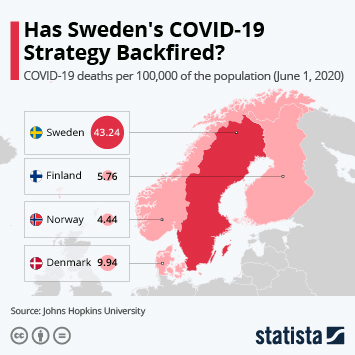