Published by
Bruna Alves,
Dec 8, 2021
Like in every country around the world, energy prices in the United Kingdom are influenced by a number of different factors. These include the global energy market and economy, domestic and international demand, extreme weather, national policies, and fuel supplies and costs. Fossil fuels – namely oil and natural gas – are the main sources used for primary energy consumption in the UK, and their global availability has a big impact on energy prices. With a supply shortage hitting Europe in 2021, energy prices in the UK faced a new level of instability, affecting suppliers and consumers alike.

Monthly natural gas prices in Great Britain skyrocketed in the second half of 2021, reaching record levels in September that year. Although the result of an energy supply shortage that hit the entire European continent, the UK was particularly vulnerable due to a lack of large-storage facilities, combined with a declining domestic natural gas production. Gas prices are forecast to drop continually but slowly all through 2022, stabilizing at an average of 40 to 60 pence per therm by 2023. With wholesale costs accounting for the largest share of household gas bills in the UK, at more than 40 percent, the household expenditure on gas is also set to rise that year.

Natural gas accounts for more than one third of the electricity generated in the UK, the second-largest power source in the country (only behind renewables). As gas prices reached record highs, electricity prices in Britain also soared in 2021. The UK’s dependence on natural gas, a combination of a quick coal phase-out campaign and inefficient nuclear power plants, was further exacerbated that year by unusually low wind power output and increased demand due to an extended cold winter.

The average household electricity bill in the UK ranged between 560 and 700 British pounds in 2020, depending on the annual consumption. Although this was a slight decrease when compared with the previous year, it was still the second-highest amount recorded in the 2010s. Grid operators have had to increase network costs due to maintenance work and governments have increased policy-related costs, such as carbon prices. Nevertheless, wholesale costs remained the leading component of electricity prices in Great Britain, accounting for roughly one third of the total bill in 2020.

In the following 6 chapters, you will quickly find the 27 most important statistics relating to "Energy prices in the UK".

The most important key figures provide you with a compact summary of the topic of "Energy prices in the UK" and take you straight to the corresponding statistics.

Energy prices in the EU 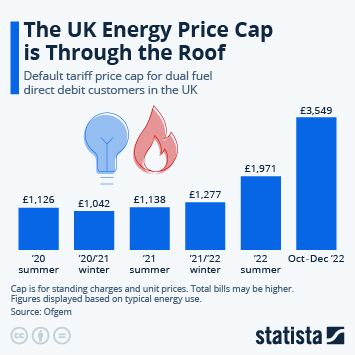 The UK Energy Price Cap Is Through the Roof 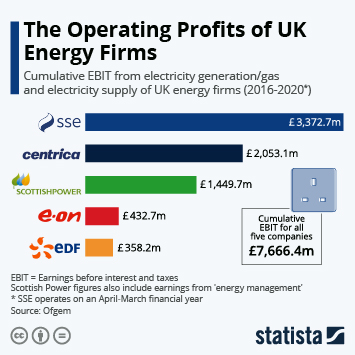