Published by N. Sönnichsen, Sep 3, 2021
The fossil fuel sector is responsible for extracting crude oil, natural gas, and coal, and is one of the largest and most sectors important in Europe. Coal had been the main source of electricity generation in Europe for more than a century, but its consumption has declined in the past two decades. Meanwhile, oil and natural gas continue to play a pivotal role in the energy industry. On average, around 40 percent of energy production in the EU is still derived from fossil fuels.

As the threat of climate change poses a major challenge for the world, many countries have seen to reducing the production and use of fossil fuels where possible. Coal is the most emission-intensive fossil fuel and as such many governments have begun to phase out this energy source. This has resulted in EU coal production dropping to historic lows. Today, Germany and Poland are Europe’s biggest coal producers.
Oil is the main fuel for primary energy consumption in the EU. It is largely used as a motor fuel and to produce petrochemicals. Since resources in the North Sea have depleted, oil production in the European Union has also fallen significantly since the early 2000s. Outside of the EU, Russia and Norway are the leading producers on the continent.

Both these countries are also largely responsible for outbound gas trade in Europe, with the majority transported via pipelines. Europe is home to some of the world’s biggest fossil fuel companies, such as British Petroleum in the United Kingdom and Royal Dutch-Shell in the Netherlands. These two companies are amongst the top 10 oil and natural gas companies in the world although the coronavirus pandemic and resulting 2020 oil crisis impacted financial results for that year.

In the following 5 chapters, you will quickly find the 27 most important statistics relating to "Fossil fuel industry in Europe".

The most important key figures provide you with a compact summary of the topic of "Fossil fuel industry in Europe" and take you straight to the corresponding statistics. 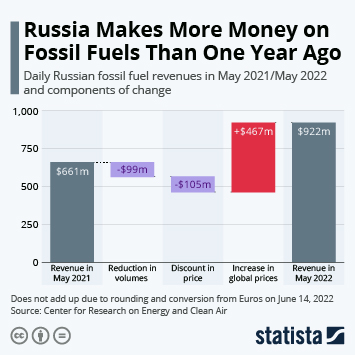 daily Russian fossil fuel revenues in May 2021/May 2022 and components of change. 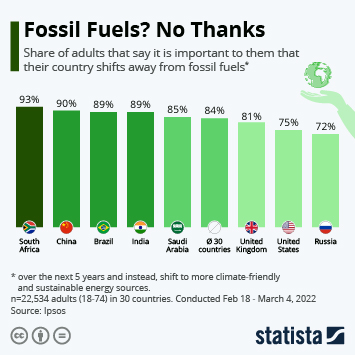 share that want country to shift away from fossil fuels