The coronavirus (COVID-19) pandemic has disrupted Italy’s economy and social life in every aspect, including the consumption of digital media. The interest in up-to-date news regarding the disease, as well as the government’s decisions boosted traffic on online news media outlets, although TV newscasts were deemed the most reliable news source. The need to escape from the overwhelming wave of information contributed to make yoga and training the most popular content on Instagram during the emergency.
During the enforced national lockdown, about four in ten Italians streamed more audio and video content, with 15 percent subscribing to a video on demand service, while an even higher percentage of subscribers was reported among users between aged 18 to 34. Among social media platforms, YouTube made up the biggest share in terms of user engagement on coronavirus-related content . Likewise, the imposed isolation and the need for entertainment contributed to the increasing use of video games.

While digital media could count on a growing and more engaged audience, traditional media were badly affected by the emergency crisis. More than six in ten Italians bought less books, magazines, and newspapers during the lockdown, while the book publishing industry had to postpone up to 42 percent of new book releases.
This text provides general information. Statista assumes no liability for the information given being complete or correct. Due to varying update cycles, statistics can display more up-to-date data than referenced in the text.

Growth in online audience during the coronavirus (COVID-19) in Italy 2020, by age

Growth in online audience during the coronavirus (COVID-19) in Italy 2020, by format 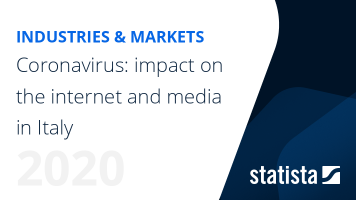 Go to report Coronavirus: impact on the internet and media in Italy
Top Seller

The most important key figures provide you with a compact summary of the topic of "Coronavirus (COVID-19) impact on the internet and media in Italy" and take you straight to the corresponding statistics.