Published by Hanadian Nurhayati-Wolff, Sep 30, 2022
Indonesia is the world’s fourth largest coffee producer and exporter, after Brazil, Vietnam, and Colombia. However, domestic consumption of coffee has until recently remained low, as Indonesians historically preferred tea over coffee. In recent years, coffee has increased in popularity, fueled by the rise of café culture and the changing consumption patterns of the younger generation.

Coffee production and exports in Indonesia

Around the world, the word java is synonymous with coffee. However, in Indonesia, the island of Sumatra is where the coffee is mostly to be found, making up more than 60 percent of the coffee crop growing areas in the country. Almost all of the coffee grown in Indonesia come from smallholder estates scattered around the main coffee-growing islands of Sumatra, Java, Flores, and the Bali islands. More than 70 percent of the coffee grown in Indonesia were of the Robusta variety, which has a lower market value than Arabica beans. Robusta beans, known for its strong and bitter aftertaste, are mainly used in instant coffee production, as well as in espresso and coffee blends.

Historically, Indonesia had exported a majority of the coffee that it produced, with its biggest markets being the United States, Italy and Malaysia. However, a change in domestic consumption patterns has started to affect its coffee exports. Indonesian coffee production had seen yearly increases in the last few years. However, so too has its domestic coffee consumption. Recently, rising demand is expected to outstrip its coffee supply starting in 2021/2022 mostly due to unfavorable weather conditions, raising fears of a shortage in global coffee availability.

Rise of café culture and its impact on domestic coffee consumption

The increase in domestic consumption can be attributed to café culture taking root, especially among the younger urban dwellers. With increased affluence and exposure to international consumption trends, younger Indonesians have embraced the fourth wave of coffee culture. Locally sourced, quality coffee, as well as iced milk coffee-based drinks in a wide variety of flavors suited to local tastes, are now in trend. With a Muslim-majority population, coffee shops became the go-to hangout spot instead of bars. In the past few years, local coffee chains have overtaken global brands in terms of market presence.

Although the coffee production in Indonesia was not largely affected by the impact of the COVID-19 pandemic. The disruptions to the global trading infrastructure was expected to affect Indonesia’s coffee exports. The economic impact of COVID-19 might also lead to less consumption in the country. However, with a relatively low average spend on coffee, it might well be a luxury that many could still afford.

In the following 6 chapters, you will quickly find the 29 most important statistics relating to "Coffee market in Indonesia". 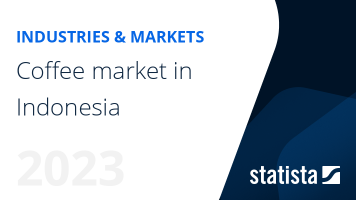 The most important key figures provide you with a compact summary of the topic of "Coffee market in Indonesia" and take you straight to the corresponding statistics.