In the same year, its competitor China Telecom generated a revenue of nearly 400 billion yuan from its voice, internet, and other services. While the number of mobile subscribers of China Telecom increased, its fixed-lines users shrank to almost half compared to 2008. To stay competitive in the coming digital era, the major telecommunications providers in China also expanded to innovative business segments, such as IoT devices, e-payment, and cloud services.

With almost 1.7 billion mobile subscriptions, China has become the country with the largest mobile-cellular user base worldwide. When 5G (fifth generation) technology started to hit the market in 2019, China became one of the frontrunners in the global 5G deployment and 5G devices production race.

By 2025, China was forecasted to host the most 5G connections in the world, approximately equaling to the sum of North America, Asia-Pacific developed countries, and western Europe. By the end of 2020, China was planning to activate more than 130,000 5G base stations. In the meantime, Chinese smartphone companies Vivo, Xiaomi, and OPPO shipped about 58 million units of 5G smartphones in the first quarter of 2021, accounting for more than 43 percent of the global 5G smartphone shipments.

The vast majority of Chinese believed that the implementation of 5G technology would have a significant impact on their daily lives. Fast internet speeds and stable internet signals were the leading features that Chinese consumers expected from 5G technology.

In the following 5 chapters, you will quickly find the 23 most important statistics relating to "Telecommunications industry in China". 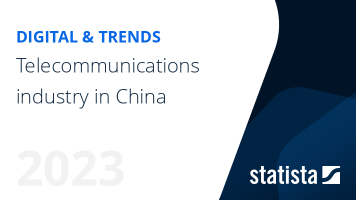 The most important key figures provide you with a compact summary of the topic of "Telecommunications industry in China" and take you straight to the corresponding statistics.

Telecommunications industry in the Asia-Pacific region