Alongside Malta, Belgium, and the Netherlands, Luxembourg is one of the European countries with the lowest implementation of sustainable energy. Indeed, the share of renewable energy in the final energy consumption in Luxembourg was lower than the renewable consumption in Belgium, yet higher than renewable consumption in the Netherlands. Given that the country reaches the European-Union goal for 2020, only 12 percent of the energy consumption would be covered by renewable sources. Therefore, the penetration of renewables in Luxembourg remains very limited.
This text provides general information. Statista assumes no liability for the information given being complete or correct. Due to varying update cycles, statistics can display more up-to-date data than referenced in the text. 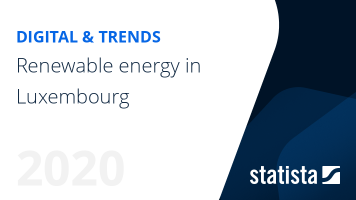 The most important key figures provide you with a compact summary of the topic of "Renewable energy in Luxembourg" and take you straight to the corresponding statistics.