Since the beginning of the 21st century, the Polish tobacco market has been undergoing profound changes. They have been influenced by, among other things, Poland's accession to the European Union, increase in societal wealth, lifestyle changes, and the introduction of new regulations. Some of these transformations affected the industry. For example, an EU directive imposed an obligation on Poland to increase its excise duty and reach a minimum of 60 percent of the retail price. The increase in excise duty impacted the change in sales volumes, and stimulated the development of illicit tobacco production and smuggling, which has resulted in Poland losing billions in tax revenues every year. Nevertheless, the fight against the black economy, the country's economic development, and the gradual affluence of society have allowed the tobacco industry to stabilize and, in the long run, develop dynamically.

Characteristics of the tobacco industry in Poland

The tobacco sector is an important segment of the Polish economy. Since 2005, the industry's gross value added has increased fourfold, indicating its growing importance in creating Polish income. Value added is the most commonly used measure of a sector's contribution to a country's GDP.
Cigarette production has increased by 54 percent over the last decade. In 2020, the value of the tobacco industry production amounted to over 11.27 billion zloty. Growing exports strongly influenced the increase in production and its value. In 2021, exports amounted to 4.1 billion euros, with a positive trade balance of nearly 3.1 billion euros. The largest recipient of tobacco products from Poland was Germany in 2020.

Cigarette consumption per capita in Poland has decreased by nearly 56 percent since 2005. The main factors contributing are promoting healthy lifestyles, restrictions associated with smoking in public places, rising prices, and growing public awareness of how tobacco use impacts health. Nonetheless, over 22 percent of the population in Poland smokes cigarettes, the most significant proportion of which are men and people between 55 and 64 years old. Apart from traditional cigarettes, Poles also prefer rolling tobacco. Yet, there has been growing interest in new products such as electronic cigarettes and tobacco heaters for several years now. They are most often used by young people between the ages of 18 and 24. For nearly 60 percent of smokers, e-cigarettes have become a way to quit smoking. The growing popularity of these innovative products is also due to health reasons, taste, and lower prices than traditional cigarettes.
This text provides general information. Statista assumes no liability for the information given being complete or correct. Due to varying update cycles, statistics can display more up-to-date data than referenced in the text.

Adriana Sas
Research expert covering the Polish market
Get in touch with us now
Published by Adriana Sas, Jul 22, 2022

Export value of tobacco products from Poland in 2021
4.15bn EUR

Distribution of tobacco exports in Poland 2021, by country

Revenues from tobacco production in Poland 2005-2020 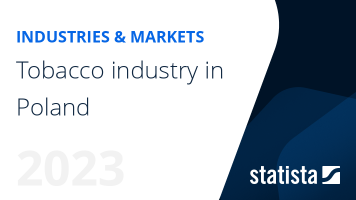 The most important key figures provide you with a compact summary of the topic of "Tobacco industry in Poland" and take you straight to the corresponding statistics.