Agriculture in Nigeria - statistics and facts

Nigeria has an arable land area of 34 million hectares: 6.5 million hectares for permanent crops, and 28.6 million hectares on meadows and pastures. Agriculture accounts for about 24 percent of Nigeria's GDP. The country is a leader in various types of agricultural production, such as palm oil, cocoa beans, pineapple, and sorghum. It is the largest producer of sorghum in the world just after the United States, and ranks fifth in the production of palm oil and cocoa beans. Nigeria is also a large global exporter in this sector. Oil, fruits, nuts, seeds are among the ten best performing export categories.

A key activity for Nigerians

Agriculture is a key activity for Nigeria's economy after oil. Agricultural activities provide livelihood for many Nigerians, whereas the wealth generated by oil reaches a restricted share of the population. According to a recent survey, some 70 percent of households in Nigeria participate in crop farming activities, while about 41 percent own or raise livestock. In rural areas more people participate in agricultural activities than in urban areas. Fishing is a less popular activity than farming. With a coastline of 850 kilometers, and many lakes, creeks, and rivers, fishing is practiced by about three percent of households. In the South South states, fishing is much more common than in others.

Among households, the most common crops in Nigeria are maize and cassava, which are grown by almost 50 percent of households. In addition, other widespread crops are Guinea corn, yam, beans, and millets. In quite a few plot-growing maize crops, households used to apply herbicides, while about half use inorganic fertilizers. Among all major crops grown by Nigerian households, herbicides, inorganic fertilizers, animal tractions, and organic fertilizers are the most common farming inputs. Apart from household farming activities, Nigeria is a global leader in agricultural production, as mentioned before. In large production, palm oil crops experienced a significant increase in the past two decades, reaching over one million metric tons in the last three years. Similarly, milled rice and soybean production has been growing as well. On the other hand, some of Nigeria's largest agricultural productions dropped, such as millet crops.

Demand and prices on the rise

The population of Nigeria is growing at very high rates and the food demand is rising accordingly. Indeed, the Nigerian population is forecast to reach over 400 million people by 2050. Estimations published in 2019 show that by 2050 the consumption of livestock products is going to increase significantly. For instance, the consumption of milk might grow by over 260 percent, for eggs by 250 percent. Likewise, meat demand will reach high levels too. This scenario could have negative consequences on the food supply in the country. Over the last years, the average share of the Nigerian population suffering from severe food insecurity has been rising. Between 2018 and 2020, over 20 percent of people experienced hunger. People in severe food insecurity would go for entire days without food, due to lack of money or other resources. In fact, the food CPI is increasing month by month in Nigeria.
This text provides general information. Statista assumes no liability for the information given being complete or correct. Due to varying update cycles, statistics can display more up-to-date data than referenced in the text.

Ten major crops in Nigeria as of 2019

Households participating in agricultural activities in Nigeria 2019, by type and area 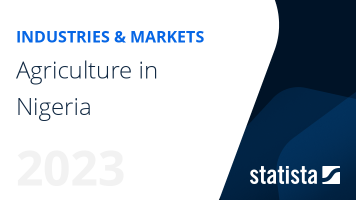 The most important key figures provide you with a compact summary of the topic of "Agriculture in Nigeria" and take you straight to the corresponding statistics.